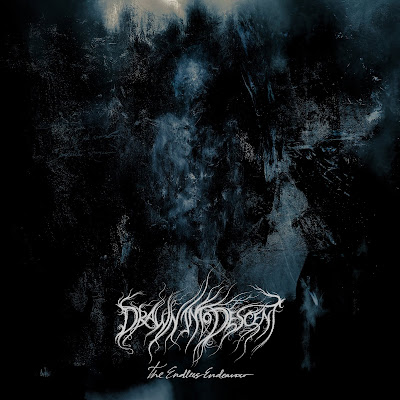 Black metal is no different than any other sub-genre of metal, in that you want it to retain the familiar characteristics that define it, without sounding like something you have already heard before or a carbon copy of another band. Even on the more straight forward opening track of their new album this band from Belgium finds their own depressive corner to work from. There is an almost rock n roll way in how some of the chords land.It seethes with dark melody.I can feel their sound rather than just hear the notes. The only draw back is at 11 minutes it's a rather long opening track and could have been cut down to 9.  "Wither" finds them sticking to the more tremolo based guitar parts with chord progressions shifting under the atmosphere created by the well layered guitars.

I would say this is not sonic enough in it's drone to have the shoe gaze influence that we call black gaze. I also do not hear the kind of spacious atmosphere I would say is post-rock either. Not that being neither is a bad thing in fact it keeps them from being another Deafheaven wanna be. There is a little bit of a Cure like sound to the strum of the guitars on the song "Death". It is very compactly written , though I think it might have been better served from vocals of some kind. Even then it does show they have more songwriting chops than your average blast beaters. The only vocals are the harshly screamed cried of agony that remind me  little of what Totalselfhatred does. This is more pronounced on "Embrace Me" .  This song does venture of into a more melodic direction and find the drums able to find  a groove rather than blast.

The most interesting blend of their sounds might be on the ten minute title track that closes the album. Dark almost goth rock guitar lines are growled over in a way that gives them more of a lamenting feel. It's dynamic and draws you in. If you are looking for depressive black metal that is not content following someone else's formula , then this album is certainly worth your time. I will give it a 9 and see how it sits with me. So far in a month where I ingest such a high volume of black metal this is standing out.