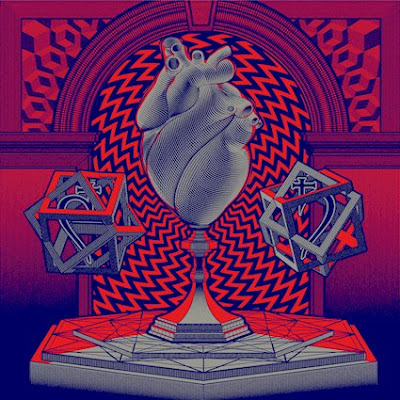 With the album's title it seems fitting more me to review this on Valentines. This band from Iceland comes from the ashes of Draugsol. So despite how heavily they might ride the line between death metal and black, they have a history with black metal so belong here this month. The vocals are often layered with more shouted vocals against the growls . Think everything I have read on this band so far focuses on the progressive element and two songs in I am hearing that as more nods to classic metal than anything close to Opeth. The drumming is spectacular though can comes across as on the busy side. There is more of a jazz inflection to the guitar solo that opens "Of Unbearable Longing". This is just well rounded playing. I would say there is more of a progressive influence on these guys and they are creative enough to push past boundaries in order to come up with riffs that don't sound like everything else.

Despite it not being that dark I like how the synths sit against the palm muted tension of  "Internal Contradiction" . We get more into Opeth's zip code on the maze of riffs that winds around "Neurodelirium" .  By this point in the album they are beginning to get set into their formula and I am beginning to know what to expect. Lots of syncopated punches and catchy chugging. They do speed up into blast beats normally once per song , though the second act does find them getting heavier with each song. The title track is more distinct due to the clean guitar tones at the beginning. Sung vocals that are more of a whisper also surface here. It takes a meaner turn and might be the most black metal song on the album.

The last song feels like an extension of the title track . It's many of the same tricks they have already visited earlier in the album. With that said they are very well done and there is little doubt these guys are talented musicians. My only complaints it this could be darker in order to have more of a black metal feel. Other than that it's an enjoyable listen, not sure if it is something I would listen to on a regular basis , but I will give these guys an 8 as they excel at what they do.