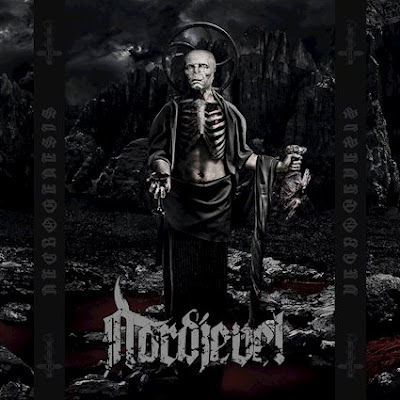 This metal super group of sorts features members of  Morbid Angel, Abbath,and Dark Funeral.  If you add all those components together then you have a good picture of the more mainstream black metal direction this band is going in. The guitars are massive. They are also very hooky. The vocals are croaked more than screamed. The drumming is fucking blinding fast and insane. The first two songs are polished and crushing. It's good that they added a slight tinge of creepy darkness to "the Idea Of One" . Then they go for a more melodic icy Swedish feel for the pulse of "Black Lights..." its sounds like cross between Dimmu Borgir and Watain.

While this album is not blast beat heavy there are some. One of the faster songs is "Amen Whores".  At this speed it sounds like everyone else and doesn't do much for me. "Fevered Lands" which is full blast ahead. I do like this one better than the previous song as it sounds more like amped up Immortal. They keep stomping on the gas even though "Nazarene Necrophilia " is more deliberate. I like the lyrics to this one. Its rare you can make them out in most black metal. I don't mind fast. I like black metal enough to devote an entire month to it , so it's not the speed that is the problem. It's relying on speed instead of songwriting. When they do both there is almost more of a thrash feel.

There is more fanfare at the beginning of the album's closing song. It like most of the album's 3rd act tends to fall safely on the blasting side . 2 minutes in they do lock into a pretty powerful chug, but lets be reminded of the rule here, which is cool riffs alone does not a good song make. If you are into guitar solos there are a lot of over indulgent sweeps on this one. I'll round this down to a 8, as it begins to sound the same toward the end. If you are looking for more mainstream sounding black metal these guys are for you.