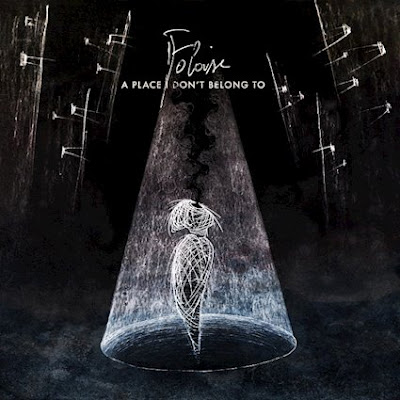 The third album from the Italian black gaze duo , who were once more depressive black metal, finds them following the trail blazed by Deafheaven. It took me half way into the opener to really piece that together. The vocals are the main culprit. They are a mid range static rasp that screams in similar patterns. The music around them is pretty lush, more on the post-rock side than the shoe gaze side, but how many of the so called black gaze bands owed much to Slow Dive in the first place?  The opener and title track have the most melody in the first half of the album. The title track gets more furious when it comes to blast beats. This is balanced out against more textured guitar tones so they are not living on blast beats alone. I like the more melancholy spacious side of what they do. The black metal parts are not the most original.

"An Emptiness Full Of You " gets off to a good start then things get weird when it awkwardly breaks down to rain sound effects. Something that worked on older Shining albums , but here it loses the momentum. Then it builds back up thanks to some cool interplay with the piano to salvage the song. They continue to make grand gestures as they play with the formula on "Leaves in the Wind" which is more cohesive and the cinematic symphonic swells work with the song rather than against. Then the album ends with two of the heavier songs. The first of these being the almost more chaotic anger of  "Consumed Soul" . This is denser in it's heaviness than "Holding Nothing" which closes out the album . "Holding Nothing" is more straight up metal with the post rock grandiosity only floating in at the end.

The more this band experiments the more they put distance between themselves and Deafheaven. The vocals could stand to have more dynamics to them. I think even with Deafheaven this is a problem.  I'll round this up to a 7.5. If you are really into the post-rock black metal thing and just trying to branch out from Deafheaven, then you might be more impressed than I am since I have been listening to this kinda thing since Alcest came out.