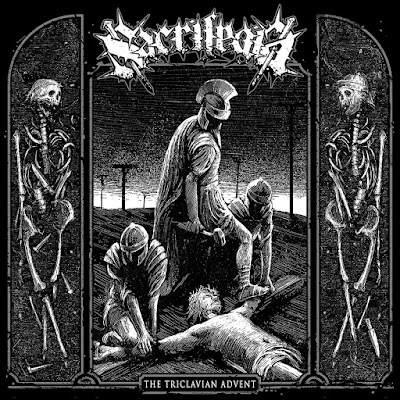 According to their press release, this might be the Irish band's debut album, but they have been around for decades. The opening song is more blistering and thrashy. They are really racing where later in the album they begin to sound more like a speeded out version of Venom. The vocals are a low anguished growl , almost bordering more on death metal. The faster moments on the album all begin to run together , I as on the opening track and don't hear something that catches my ear til the 5th song. Going back to give another listen it's evident that while I like when Destroyer 666 does something in this zip code , they have more elements of classic metal in play and the songs catch my ear rather than blaze past it. Some times it slows down like a dramatic break down, but it conflicts with the rule here which is cool riffs alone does not a good song make.

This leaves "Armored Angel" as they only song that really connects and demands multiple listens. While they do not rely on blast beats alone , the fast drumming has the more punk influenced slant. With "Unhallowed" The vocals are not as interesting  as they were on the previous song, but better than the other songs on the album.If you were going to say this band is from Ireland, it would not be the first place I would have thought. Not that band's from Ireland have to sound like Primordial, but they do tend to be darker. They way the vocals fall on "Unheeded Warnings" sticks with you better than some of the other barking despite the guitar that was so fast it felt just like a static trembling. This is not the best mixed album , but it's not cvlt lo fi either.

There is more of a thrash feel to the last song. The blinding guitars are more black metal, but this is more aggression than atmosphere and anger is the only frequency I hear. As an instrumental under two minutes this is more of a outro than a song that stands on it's own.  I'll round this down to a 6, if just angry speed is your thing you might like it more than I did. Not sure why it took them decades to come out with this . This album comes out April 12th via Invictus Productions.