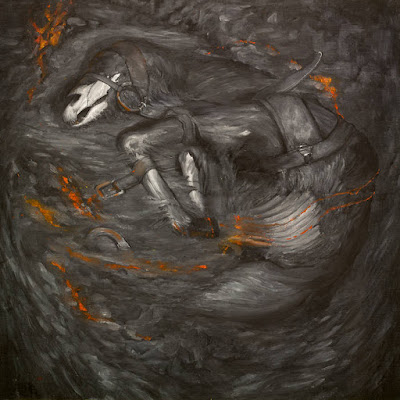 I loved the 2014 album "Solens Vemod" . So I was looking forward to this one. To my chagrin the 41 minutes worth of music is being crammed into 3 songs. The first song  whose title translates to Hover Over the Expanses is 20 minutes. I appreciate how darkly melodic it is bordering on doom, but the first 5 minutes kinda just drones off the same theme. Closing in on the six minute mark things pick up. So the first four minutes of this song could have been edited down. The bass is impressive and how many times does that get said about a black metal album? At the 8 minute mark there is a fucking head banger of a riff that really drives. It takes about 12 minutes for the vocals which are a mid ranged rasp to come in. By the end of the song there are sung vocals though they sit back in the mix.

The title of the album translates to soil and ash, so there seems to be a nature theme here. The second song is titled in English from Swedish " Gray the Bitterly Sown Forests" . It is more deliberate. The atmosphere is thick funeral doom. Just over the half way mark sung vocals come in , which provide a nice dynamic contrast from the more commanding snarls. There is a droning guitar riff that does repeat in the this song. The last song which translates to "Lower Me in Silence" starts off hammering at you then the layers of melody and atmosphere begin to sink in. The blasting is pretty balanced against this and it sounds even better when they drop down into a groove. I think this might be the album's best song. The vocals eventually get almost power metal. Not even four minutes things have built up so epic that you can't imagine where they are going from this point . The answer is they kind of keep the intensity and coast over a more half time section. This is just in the first 9 minutes. Like their previous releases the violin plays a large role in establishing many of the melodies.

I'll give this album a 9 so it falls short of  "Solens Vemod" , but is still pretty impressive. I like the sense of melancholy and the big sounds some of the heavier sections invoke. If you are a fan of this project there is nothing you are not going to like in terms of what they are bringing to the table sonically. I think the longer song format, doesn't lend itself to being as fine tuned when it comes to the song writing as things are allowed to sprawl out.