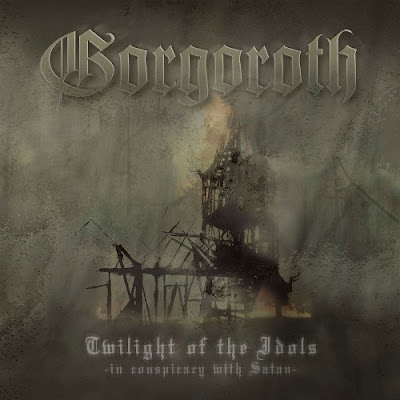 Every Black Metal History Month, I dig back into the crypts and review a older album , by one of my favorite iconic bands. Gorgoroth is one of those bands. I prefer the albums Ghaal provides the vocals for. I think Ghaal personifies black metal best, perhaps better than any other front man in the genre, hmmmm....top 10 black metal front men might be a list I need to make this month. Ghaal is for real and is not fucking around, when he says praise Satan I fucking believe him. That is important. I am so glad I chose to take another listen to this albums as it's probably the most under rated that Ghaal is on, and every time I listen to these guys I have to ask myself why I am not listening to them all the time as they are fucking incredible. The guitar tone is mean as hell as the vocals are even more biting. There is such an evil chaos dripping from the first song that hits you like a blast of hot air from the mouth of hell. From there the bring a class thrash influence to the commanding riffs of "Proclaiming Mercy".

Infernus is a great song writer and I love how he lets the chords ring out to make them creepy as fuck on "Through Carved Stones".  "Teeth Grinding " might be slower and less in your face than the first 3 songs , but it's powerful in it's own right. Selvik from Wardruna plays drums on this album and I have to wonder why doesn't he play drums more. They come back with more thunder on "Forces of Satan Storms" . It hits s hard as any metal band and smooths out into a tense chug. "Blod Og Minne" might be the most straight forward song thus far on the album and it relies heavily on speed. The first half of "Of Ice and Movement" is a speed fest then it slows into a cool groove before floating off into mechanical weirdness.

This was the band at their peak. The vocal mix is mean and was produced in a way that gives it an over driven abrasion that cuts as deep as the buzz saw guitars. While it might not be as good as some of their other work with Ghaal, it certainly sits well with their body of work and is as good as any of the albums without Ghaal. I'll give it a 9.5 , falling just short of perfection as it gets to speed centered toward the end , but there are plenty of great fucking songs on this to make up for that.
Posted by Wilcifer at 1:51 PM