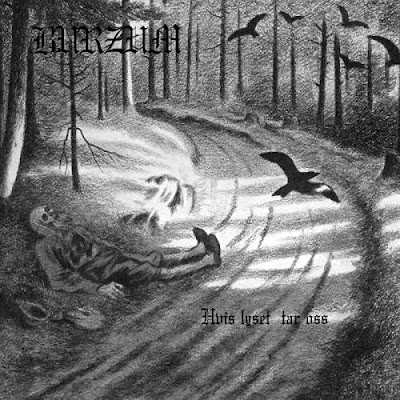 Ok once again it is time to take a look back at albums long considered classics and see just how good they really are. So Burzum is going under the microscope to see how their 1994 album stands the test of time. Considering how this was lo-fi for even then time when it came out, it is going to be a test of how good were the songs, since at the end of the day that is what matters.The 3rd album "Hvis Lyset tar oss" or  if the light takes us. There is a great deal of ambiance before we hear the first cranking of distortion. Three minutes in the actual metal fires up. It is more of a stomp than a blast beat. Varg's drumming is pretty impressive, perhaps even more so than his guitar playing which I feel improved post- prison. I do like how the ambiance of the synths is layered over the more aggressive drumming, though it drowns out the guitar. The vocals take on a higher shriek when the riff modulates. The arrangement goes above and beyond what imitators attempt.

There is more of a blasting tension going into the title track.  Driven by many of the same trapping we hear in today's black metal, this was just from 1994. The more raw lo fi cvlt sound possesses "inn slottet ira droemmen " . The snarl of the vocals is more feral and the music carries a more relentless anger that pounds at your ear drums. It eventually smoothes out into a more powerful throb that has a wider depth of feeling than just metallic hammering.

The last song is just droning synth. I guess for the time this came out , this kind of folk influenced kraut rock was some next level shit. Not really my thing but the songs that do actually bring the metal are good. I will give this album a 9. While it is praised by the cool kids, who do not even listen to Burzum now that they became social justice warriors, this album is not perfect. Yet considering when it was released the results were impressive and I am sure to have heard this in 1994 would have been mind blowing.