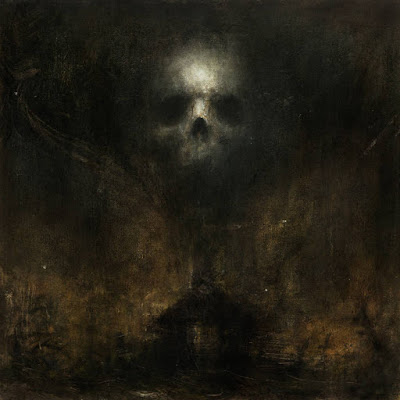 Naas Alcameth from Nightbringer and Akhlys bring to us this piece of darkness. The first track is more of an intro an less of a song than "Holy Mother of  Terror" . The emphasis is on double bass rather than blast beats. You might think this gives them a more death metal sound , but that is not the case. The vocals have more of a scowl to them. They have a icy atmosphere draped over the album. At times it reminds me of a less straight forward Immortal. The vocals have less of a croak and the epic thrash riff are not there. By the 3rd song they are pouring on almost too much speed for their own good, though things have a disturbing dissonance that makes up for this. The vocal go into almost a more Cradle of Filth like rasp.

They continue to pour on the double bass before things get creepy for the title track. Between the guitars and the synths they are throwing a lot at you quick. While this is very dark, I think it's angrier than melancholy. The vocals get nastier in their intent on this one. They do use blast beats, but not in the same droning manner of bands who want to be Darkthrone do. By the time we get to "Thresher" the novelty is beginning to wane and the way the came out you full speed ahead, makes everything a blur. Sure if you listen closely there are some nuances. But are they enough to make this stand out from all the other extreme metal bands that throw the kitchen sink at you at 200 mph. Then the more fury ridden blasting comes going into "the Watcher on the Threshold".  The signature double bass comes in and give more breathing room, though it's more in your face than a dynamic ebb. It done better than the riffs rained down upon your ears in the previous song. I can see where this might be what your average fan of black metal might want.

Things get darker and more melodic for "Dead Spirit of the Place". This gives them a more original sound of their own, though it does depart from the more traditional trappings of black metal aside from the rasp of the vocals . I'll round this album up to an 8. It is not likely to get many more listens from me , but I can appreciate it for what it is and it's really dark black metal which is the way it should be, I just feel it relies on speed to much for my personal tastes, though it's well done.