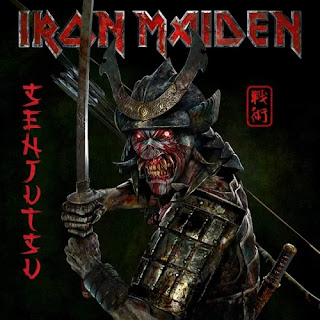 Here is the band's 17th album. They have a more consistent track record than any other metal band. With any Maiden album my first concern is What shape is Bruce's voice going to be in ? At 63 this is a fair question to ask, since for me it is a defining part of their sound. Bruce belts it out well on the title track that opens the album. The guitar has more teeth than what we have heard from the band in more recent albums.  The chorus is big and epic it's easy to hear how these guys are the god fathers of power metal. Though they have a great deal more balls than your average modern day power metal band. It is impressive here considering the fact Producer Kevin Shirley has also produced  Journey, Rush and Dream Theater. However Steve Harris co-produced it so I am sure he was actually running the show here.  The lost art of the guitar solo is well honed here. The guitar solos all tastefully serve a purpose in the melodic theme of the song.
One thing that does strike me as different is even on the Steve Harris written "Death of  the Celts" the bass is not hammering you with it's gallop. The folkish metal  that haunts the song takes you back to "Piece of Mind" era prog musings as well as reminds you Maiden was a huge influence on folk metal. This song embraces their classic song in a way we have not heard for a few albums.  Even in the more frolicking passages they still keep you very engaged. The gallop is back with "Stratego" which is everything I could want for in Iron Maiden. Are these Bruce's highest notes?  No, but he gets up higher than I expected from him at this stage in the game.
Things get much more proggy with "the Parchment" . At twelve minutes and thirty nine seconds it is still shorter than "Rhyme of the Ancient Mariner" . The chugged riff at the two minute is hard not to head bang to. This might be the first song since Gers joined in 1990 that I have noticed all three guitarists playing distinct parts at the same time. Some I have always paid more attention to live. This song is a testament to the playing of all three guitarists as each of them shine.  When I first heard the lead single  "Writing on the Wall"  the bluesy tone struck me as more rock n roll than metal. My thoughts might not have changed on that part , but has grown on me more .
There is a more trippy intro  to the more introspective beginning of "Hell on Earth". It is just the calm before the more triumphant gallop they are known kicks in. The guitar harmonies are still present they just do not feel the need to return to the 80s formula popular from songs like "The Trooper" . It is also not as hooky or anthemic in nature, but has their signature to it in a manner than does not feel recycled. If I had to pinpoint an era it has the most in common with I would say "7th Son.." There has never been a shortage of dynamics when it comes to these guys and this up holds that standard. "Lost in a Lost World" also ups the irons in a manner that could have come from 1988, but is not these guys punching the clock and coloring by the numbers. Midway in is another mandatory head banging riff sure to pump up arenas. "the Time Machine' has a certain brightness to is going to grow on me though there is a really killer riff leading into the solo section.
If you do not know if you like Iron Maiden or not , then you must be 12 years old and are not reading this. If you clicked on this , then you know what you want from these guys and this album is going to give you that in a fresh way that does not feel like a band trying to recapture the glory days because they never left. There is never a moment that doesn't not click or gel with who they are. There is no real filler on this album, the first single is the weakest song on the album and that is a relative term as it is still better than anything another band trying to be them could do, and a solid song in it's own right even if it is not just what I showed up for,  so I will give this album a 10 any way as everything balances out in that regard.  If this is their last album it is a fine summary of their legacy.
Posted by Wilcifer at 7:55 PM