Full of Hell : "the Garden of Burning Apparition" 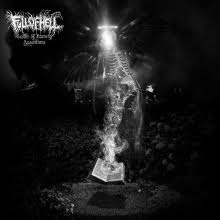 The album opens with a one minute blast that is almost hard to call music it is so abrasive. They are better at using this many than most of their peers. They main the speed , but are less blasting and more pounding on the second ditty. This song is just under two minutes which is brief , but manages for them to get the point across, perhaps better than the minute temper tantrum. |Murmuring Foul Spring"  sounds more like blackened hard core which in truth is what this band has not become, but been if you boil them down to their simplest form. When they do break the three minute mark on "Derelict Satellite" they waste a great deal of time churning in distorted noise. They have taken things here to an abrasive new level.  Which I can normally appreciate there is just nothing redeemable about that song.

They at least have a riff on the title track. They get more song oriented in the way that finds them playing to their strengths with " Eroding Shell" . There is a little death metal to the hyper aggression of "All Bells Ringing" .  Sometimes their hurtling spastics of gnashing and lashing, just sounds like every one else doing this ultra violently heavy thing. I used to get these guys confused with Trap Them and the lines are more fully drawn here. Sometimes it is clear they are out just to torture your ear drums and not really about songs. On "Industrial Messiah Complex" they do lock into a death metal groove and the vocals take on more purpose.

There is pretty decent and almost straight forward metal guitar playing the rest of the band conforms to on "Reeking Tunnels" the angular riff that crops up reminds me a little of Converge. The second to last song is a burst of noise with a title , it only lasts for one wasted minute. The last song is spastic hard core death metal which is something that works . I will round this down to a 7, I heave heard them do better, they sacrificed that for the sake of being heavy and I have heard other bands this year do that better. This is unleashed by Relapse Records October 1st.