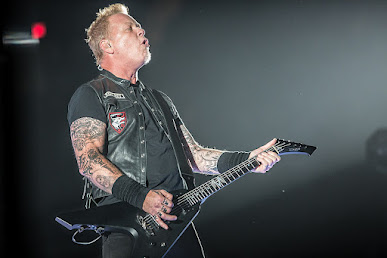 The new tribute to the Black Album called the Metallica Blacklist, is a collection of artists each covering a song from the band's biggest selling work. To review this as a whole would be a daunting task since there are 5 to 6 artists covering each.   So I broke this down by song,  So you are getting an installment of this review for each song.
Alessia Cara a Canadian pop singer is first to take a swipe at the song. It reminds me of the trailers you hear a pop singer doing a minor key cover of a classic rock song for Millennials who never heard the song in the first place. The riff of the original does occur so there are some rock elements to this one.
Then we have slacker singer songwriter Mac DeMarco taking a more accurate stab at the song. His impersonation of James is pretty decent when it comes to the phrasing , then solo is also spot on, so while I do not have any complaints , I am not sure this is the best introduction to who he is.
For Ghost to show up and act like a bunch of pussies by turning it into a piano ballad for the first verse is suited. They do stomp onto the distortion pedals, but then make the chorus way too happy,  Which given how terrible they are is a given. Journey covering this song might have been a better option.
Ghost's version is not the worst that dishonor belongs to Columbian singer Juanes whose version is unlistenable. Rina Swayama is soulful in her take, the beat is more dancey, it reminds me of if Wicked Wisdom had given this a try.
If I had to place my bets on who was going to do the best version of this song given the choices at hand my money would have been on Weezer. While River's does not offer the most aggressive vocal approach which might do to DeMarco, the overall sound is punchy like a band of actual musicians who had been slugging it out on the road for years much like Metallica themselves .  So Weezer wins their round for "Enter Sandman"
Posted by Wilcifer at 9:54 AM