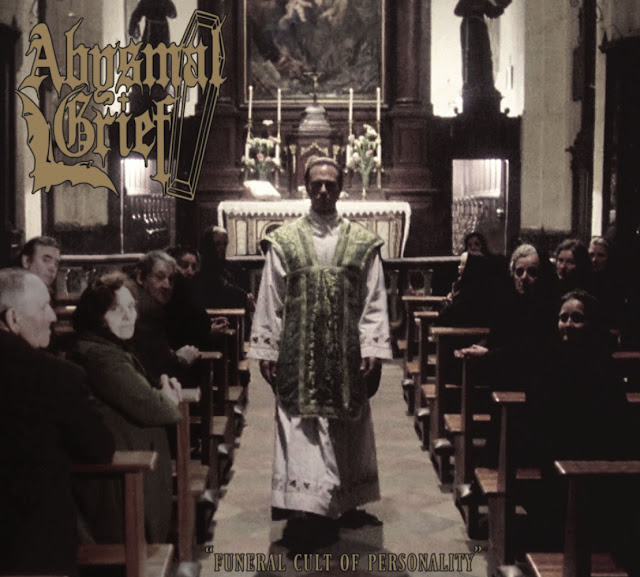 This Italian band gets called doom more often than not on the inner webs and by the end of the first tune from their new album I am not sure if this is the most effective description they should be filed under. It is mid temp early metal style that has more in common with Mercyful Fate than Candlemass.
The vocals are a spoken Tom Warrior like snarl and I am not going to call Celtic Frost doom either.  Sure even in the face of the big epic guitars "the Mysteries Below" work off of, there is a darkness to what is going on here that has more in common with black metal in it's earliest forms than the moody melancholy of doom. These guys have more in common with Watain sonically than Pallbearer.

They do come closer to doom on the darker This Graveyard is Mine".  Though overall I would say this is best described as going in a more sinister direction than being actually doom. The keyboards work in conjunction with the guitars to give it a haunted house harmony. This does feel more theatrical like a Hammer Horror movie rather than anything Satanic going. The trappings of the dark side without being fledged to it.  The instrumental "Reign of Silence" works of a marching riff, but has creepy layers of synths so it holds my attention better than most bands would if they attempted similar.

By the time we get to " Idolatry of the Bones "  it dawns on me one of the reasons this band falls on the black metal side of the fence and not the doom one is the snarl of the vocals is more hateful than not. The doomiest part of the new album is the last song . The keyboards and the guitar play the riff in synch. The vocals sound more like old Mayhem than not. I will not even say this is blackened doom. There is not a blast beat to be found on this album. But one song leaning in a doom direction does not make it a doom album, nor does it make these guys a doom band. They are just dynamic. What they do is engaging , but fairly simplistic, though I do wish there were a few more songs, though it is better to be left wanting more. I am going to give this album a 9, a good one to go in Halloween season. This album will be realeased November 2nd on Sun & Moon records.