Creeping Death : "the Edge of Existence" 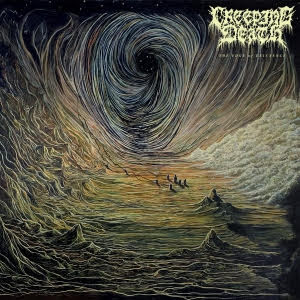 The first three songs on this album are new and the final three "Sacraments of Death" , "Doused in Flames" and "Skinned Alive" are new versions of the songs. On the new songs it is clear what worked for the in the past is working here. There is a great deal of hook and groove to the riff that powers the mean title track that opens the album. There are a few bursts of speed but the focus still remains on this being a song rather than just an assault on your ears . The riff to "Relics From the Past " focuses on the type of tightly coiled picking that empowers a great deal of death metal . They do it better than most , but I am not sure this is their strongest suit in terms to the over all scope of what they do, as I prefer what went down in the first song more.

"Humanity Transcends" finds a more deliberate paced riff with a great deal more power before they blast off. The need to blast off , sends them back into the pack of what every one else does. Though I do like the growl of the vocals captured here. Is this their most memorable song ? No . Midway in it is course corrected with a pretty cool riff leading into the solo. I can say that after listening to this there is a seamless transition from the new songs to the older reworked ones , which for fans of their old stuff is a positive note. On "Sacraments of Death" the newly refined guitar tone gives the ripping riff that opens the song new aggression. The thrashy nature of the riffs, make them hard not to head bang to.

There is a Morbid Angel vibe to "Doused in Flames " without it being a total homage. It is more "Altars " era . The crunch of this version feels more straight ahead. Perhaps this is in the drumming.   The solo to "Skinned Alive" is the first thing that feels retooled . Some parts feel faster and over all the song has a heavier vibe to it . It is not rushed like most death metal aside from returning to a brisk attack here and there. I will give this a 9, wish it was an entire album of new stuff, but taking what I can get from these guys .