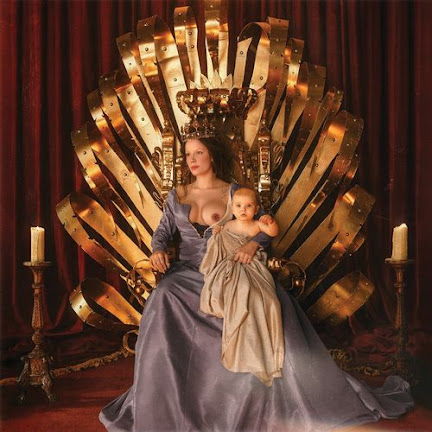 This collaboration with Trent Reznor and Atticus Ross is supposed to be a concept album about motherhood. This is not a fact that is in your face as the lyrical content does not tell a story as much as present a unified theme.  What it is , is not her common form of pop music which she has shown an adventurous streak with in the past.  Imogen Heap emerges as an influence when it comes to her vocal style. Of the first three songs  the second is my favorite. Her melody weaves around the static tension of the synth pulse. Reznor's hand in the third song is more noted ,as it has more of a frantic rock feel. She is back to her old tricks on "Lilith" which has more of a hip hop under current, though as a song it still works in more of a pop direction

"Girls is a Gun" is less focused. The vocals want to go in one direction and the more techno ish flow of the music in another. The melody provides some what of an anchor but it is the first song that feels like filler compared to the strength of the songs before it. There is a similar juxtaposition with "You asked for this" . Though the more organic rock tone, gives it a better drive, the odd thing is how the mix is so uneven here.  This makes it feel kind of like karaoke . Once we reach "Darling" the album begins to slow thanks to a series of ballads. "1121" being emotionally more dynamic of them . Things come back to life with " Honey" which sounds like alt girl pop from the 90s. This is a better direction than the pop of today is in. "Whispers" is another less focused moment where it shows how this collaboration sometimes is uncertain.

Despite the stupid premise of the lyrics seen in the song title " I am not a woman, I am a god' , the correct term for a female god is a goddess , so this makes her look like an idiot, but the music compensates for this oversight. The most Nine Inch Nails song on the album is "the Lighthouse" , though this is not the album's best song it is pretty solid.  It would have been a better closer than song they chose which is another moment where they seem less certain what they are trying to do .  I  will round this one down to a 9 as it sometimes is uncertain of where it wnats to go though most of those moments are still pleasing to the ears.