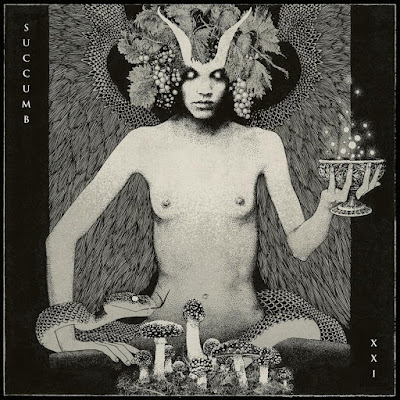 Yes, this San Francisco death metal is heavy, but can they write a song ? This is the first question I asked, when I left the hype at home and settled in to give this one a listen. It opened with such a neck throttling blast of heaviness that the answers to this questio9n was uncertain going into the second song. The very fact they are on the Flenser, as label with a reputation for forward thinking artists means they are not going to simply be recycling Incantation riffs. There is a fair amount of chaos . Yes grind core and especially Napalm Death is an influence. The second song, does offer more mood and breathing room, than the attack of the opener. They revert back to that more primitive state of brutality on "Okeanos". The vocals begin to have equal punk snarl as they do growl by the time we get to this song and they are better for it . This also aids in the songwriting process.  They do this but do not relent in hammering you with the aggression.
With "Smoke" it is interesting how the open chords ringing out in the guitar that opens the song seems to pick up where they left off with the previous song, but then they lock into a heavier chugged riff and go in a different direction.  Still very dense and heavy with little interest in melody , what they are doing some how works just fine for me here. They close "Graal" with a really strong riff, so the song goes some where, there is just a mire of more uniform sounds leading the way to get there.  They do have the fact that they are dark, emotive and organic going for them which leads to sonic heaviness.  Cheri does succeed and finding enough heft to her voice that she becomes gender neutral in her delivery. At least for the most part. The quick two minutes burst of song that can be found on "Aither" not only high lights their grind core leanings , but works as they might burn you out with too much of this kind of ear beating.
At first "Some" sounds like it might get hindered by adhering to closely to the confines of their established sounds , which do lay well within the bounds of death metal. They give into lapses of speed driven obsession , doing their signature ringing of the riff  to give things room to breath and go back to business as usual. They are good at what they do , it isa very well groomed one trick pony.  I think by the last song it is evident that I was grown comfortable with what they do, and every song then does not have to be their best. Some of this is just the compromise that seems to be made given the bulldozing nature of their sound. The angular parts might not be whatever death metal band does but they are hitting the notes the have perfected on their sophomore album, even if no new ground is broken in this sonic grave yard.   I will give this one an 8.5, due to the one trick pony aspect.
Posted by Wilcifer at 6:12 PM