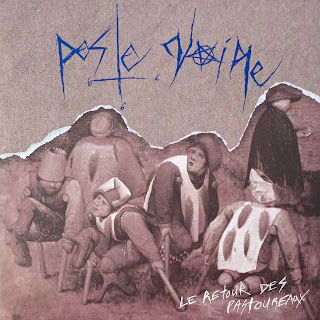 This gang of French maniacs continues to spit in the face of expectations . along with what it means to be black metal . They abandoned black metal to be more progressive, but in a very crude and confrontational manner. Now they have more of a punk thing going on when they are returning to being a metal band. It is not a straight line for them to reach this place. This is a more organic album as it has many acoustic guitars being strummed , in fact the first song is pretty much just that. It is such an odd introduction I am not counting it as anything more than a  twisted intro. The fugal horns leading into the first actual song are a continuation of the mood the album opens with before they throw themselves into something closer to black metal. Some of the progression have more in common with more traditional metal. They do find a blast beat or two along the way.
Not the best production , but they have a rawer savagery to themselves over all here to it works with what is going on. This is combined with often angular and discordant passages to offset the more straight forward metal chugs. As a whole what they are doing works. It has their finger prints all over it while not being limited by that. "Cacatov" finds the band showing how capable of conforming to the more traditional metal sound when the want to. The give this notion the middle finger midway into the song throw themselves into a more straight forward punk flavored black metal before dancing into a more acoustic theatrical cabaret of sound.  They branch out into something more folk based , perhaps they are planning on turning into Death In June, I am sure they are fans . Not that his vocals veer from what he normally does , perhaps marginally more nuanced. The guitar brings more rock flavor to things.
Too things get weird at any point , would be to miss the point of what these guys do. As far what you might normally expect from them, this is a more stream lined and melodic effort. He sings better than I have him sing before on "Haut Les Schlass" .  'Blues Arverne' is a power ballad in definition though not paying as much homage to 80s metal as a band like Shining has in the past. It is dynamic and melodic. With a calm before the storm, but the metal they bring to the table is more raw and chaotic, though not black metal, at least on this song. They continue the acoustic theme with the last song.  Not really into the spoken word thing in the first three minutes, but what they do in the second half of the song is pretty interesting. I will give this album a 9.5 , even though I do not like the first half of the last song, I think this is their more accessible album by far, and even then they spit in the eye of convention. They took a chance got weird and it once again works.
Posted by Wilcifer at 6:26 PM