Rivers of Nihil- "the Work" 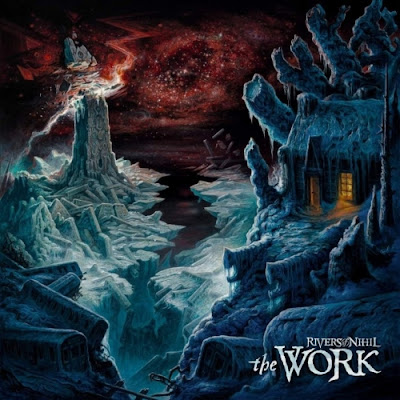 I listened to this album a few times through before I sat down to write about it. This is different for me as it is normally me typing as I listen to it for the first time. First off, it is really well done. Secondly though it is not all that original, in terms of the bigger picture of what they are doing here. It is their more commercial work yet. If there was an album that was going to break them through to a larger audience this is going to be it. Is it a sell out ? Hmmm, well maybe in some ways. There is more clean singing, but it works for the songs. The are really nibbling on Meshuggah"s nuts in terms of the drill sergeant like bark that rides the angular grooves here. The second song finds the band showing most of the tricks they have up their sleeve after this they are variations on a theme, perhaps more sax or clean vocals, but it circles the same pit.
On my first listen the way they handled clean vocals on this album reminded me of Opeth, but the more crooning oddness is the trickle down effect of Mike Patton's influence, so it would be more Dillinger Escape Plan in that regard. "Wait" is basically a power ballad. To their credit the more accessible side of the coin, means that while in many ways this is a progressive metal album they are still focused on the in the sounds are perfect , now as the assembled into prefect songs, well every now and then they are :Focus" being one of those moments. The album's most beautifully dark song is "Clean" which is a cautionary tale about drugs and romancing the smoking stones. It is at this point midway into the album that they hit their stride. There is a more industrial element present that I am a fan of. Then there are moments where the more progressive elements find them not as focused like on "the Void From Which songs rather than the razzle dazzle of it all, though they are not afraid to let out a ripping guitar solo as needed. This album is perhaps most impressive in terms of how well it is produced. It sounds prefect, as No Sound Escapes".  To contrast this the show with "MORE?"  they are capable of being more compact and in your face, thought the bits of atmosphere do not work as well.
"Tower2" is more of an interlude than a song, so it won't count for the purpose of this review. They delve into a darker moodier side for "Episode". The clean vocals are not only more plentiful on this album , but they have greatly improved as have the lyrics . The way they question God on this song is cool. I love the line ... 'I fucked up all the good things / I believed in ". "Maybe One Day" is the kind of prorggy strummed ballad that would feel more at home on a Porcupine Tree album. However it is also really well written and preformed so hard to argue against it. The 11 minute title track is pretty epic and finally makes the most of the sax that has been hiding in various corners of the mix  on this album.It overall as a song is a lot to digest / Given t he scope of this album and how well some of these songs are written , I will give this album a 9 and see how it sits with me.
8.4
Posted by Wilcifer at 5:46 PM