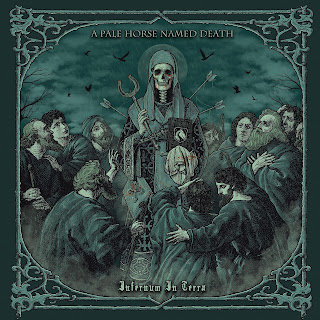 I really liked their last album they released two years ago. Obviously I am also a big fan of Type O  Negative , as well as Life Of Agony, so kept an ear open when it came to what Sal was doing. Up to this point I have appreciated it but did not really give enough of a listen to become a fan until the last one. There is less of the doom vibe that pervaded the last album and more of a Alice In Chains flavored grunge vibe. Less rock n roll, and more intentionally darker metal. There are flirtations with Hot Topic styled goth on songs like "Cast Out From the Sky". In the 90s there was a great deal of darker grunge that had one ear open to what was going on in Los Angeles. Not the more elegant Sisters of Mercy style goth Type O Negative flirted with , but more post- Reznor Marilyn Manson vibes.

There is a more relaxed rambling sense of melody to the more rock tinged "Shards of Glass' which would have been radio friendly in the 90s. Not a ballad but the guitar is not as thickly distorted and more strummed.  The way the vocals are doubled on "Lucifer's Sun" bring it back to more of a grunged tone, even as the guitars get heavier and more  droning.  "Two Headed Snake" finds them paying more homage to Sabbath, who was a hug influence on Type O Negative so this is old news, but done in a way where you hear them dressing this up with some of their own sounds. "Slave to the Master" features vocals that are not as inspired and feel like they are just color by number, to the narcotic pulse of the song that could have been better.

There is a little more of an interesting groove to "Devil's Deed" which seems to be about drugs. The vocals work better on this one, an element that on this album feels more hit or miss than on the last album. It falls somewhere in the sonic spectrum between Godsmack and Marilyn Manson. "Reflections of the Dead" is the last actual song, the track after it is just a piano outro. It was a cool song to end it on and perhaps the most Type O of the bunch as it has a depressive drone to it, not doom, but darker grunge. I will give this album a 9, very solid song writing, if you are a fan of the band this might be a more grunge / hard rock direction and less metal but the songs are well done. This album drops September 24th