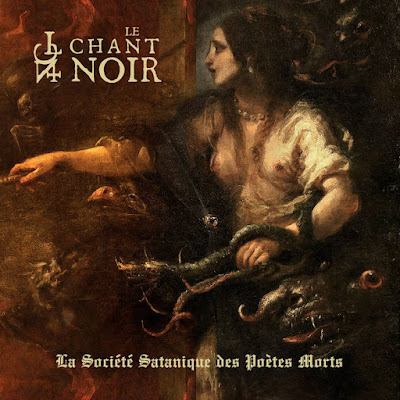 This bands name might fool you into thinking they are French , when they are in fact from Brazil. I commonly refer to the egregore of a region , since music is about vibrations , black metal should be even more sensitive to this fact since it tends to fall along a more ritualistic occult nature. Brazil is most noted for being metal fans but let us not forget spawned to huge metal bands Sepultura and Angra. One is death metal that turned thrash the other power metal. So not the darkest. Though Sepultura was darker than many of their peers. This project also enlisted musicians from other more black metal radiating regions in order to make the black metal theatrics here work better than if they were left to their own devices
One thing about this a. Lots of dramatic keyboards. To their credit they do not rely on blast beats. The more mid paced third song is one of the album's strongest moments for sure. They remind me most of Cradle of Filth if I had to pick one band in the spectrum of black metal bands, looking back Cradle of Filth would have been the least black metal of the bands that spawned from the 90s .  The first song is very deliberate and kinda makes me think of Twisted Sister's "Burn In Hell".
There is a great deal of raspy snarls and croaks regarding Satan. I believe none of them . The mix of this album does not do it any favors as the keyboards are too high and the guitar needs to sit up higher in the mix. On the fourth song the vocals drop down to a lower death metal growl and that works better for their over all sound than the higher pitched snarls. Some of the guitar melodies are pretty decent and in many ways this band is good at what they do. What they do also happens to not be the most original . "Le Baron Sanglant" finds them picking up the speed into a more familiar blasting. Not that they are not also capable of creating a more dynamic and making heavy metal haunted house music.
There are several songs about vampires. These seem to require spoken word narratives that make the Cradle of Filth comparison more glaring. Yeah I do like my black metal to be melodic , some of the more flowery symphonic songs like " Le Danse Macabre" does not resonate with me like the more dissonant and atmospheric actual black metal that does.  The song after this has a more carnival like tone which works better until they feel the need to pour on the speed,. There is a more sung vocal that is a almost gothy baritone, you might think this is something that it up my alley but the execution is a little off. Still to some extent this song works better than many of the others. Overall it is an interesting listen, they have promise as a band and  I appreciate what they were trying to do as the overall sound is still pretty dark so I will give this one an 8. Not proving that Brazil could be the next hot bed for black metal as this is not a black metal album per se But I can hear how it might be confused for one.
Posted by Wilcifer at 4:41 AM