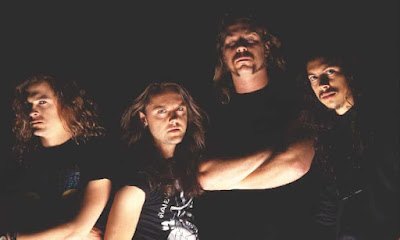 The new tribute to the Black Album called the Metallica Blacklist, is a collection of artists each covering a song from the band's biggest selling work. To review this as a whole would be a daunting task since there are 5 to 6 artists covering each.   So I broke this down by song,  So you are getting an installment of this review for each song.  Though when we get to some of the deeper cuts there are only a couple versions and in this installment we are covering those.  This is  the final break down of the songs, the last part 8 I will compile the best of each songs to present what would have been a better tribute album, but for now here we are with  "Of Wolf and Man". The one shot it gets is taken by a folk country project called Goodnight Texas,  I would have preferred a darker rock take on this Katatonia would have been a good choice.  Instead we are getting their truck stop hippie version, which is nice, but it is a song about where wolves and does not need nice, Murder By Death would have been better.

Idles who are not normally a bad band, though a punk band which means they can be sloppy try some kind of version of "the God That Failed" and it sucks pretty bad.  Irish singer Imelda May, does a much better with her bluesy poppy groove , it comes closer to being at least a rock song.

"My Friend of Misery" is first take on by Cherry Glazerr, who is a band I normally appreciate , but their cover is a a little disjointed , the chorus is about all that is there the verses are a wreck. Slothrust would at least have been able to rock it out when needed. French singer Izia's more pop take on it is closer in terms of having a more driving beat and a melody that captures the song. The jazz version by Kamasi Washington, makes less since than what Cherry Glazerr did .

It is a  shame the "Struggle Within" did not get a heavier version though  Rodrigo y Gabriela are god at their style of Spanish guitar.  They have a grasp of metal without playing it, but there are many bands that could have done better.

Email ThisBlogThis!Share to TwitterShare to FacebookShare to Pinterest
Labels: Metallica, the Metallica Blacklist