The Metallica Blacklist-pt 4 "the Unforgiven" 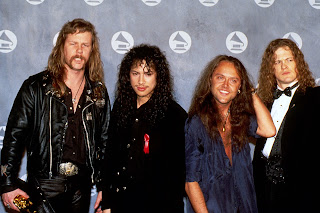 The new tribute to the Black Album called the Metallica Blacklist, is a collection of artists each covering a song from the band's biggest selling work. To review this as a whole would be a daunting task since there are 5 to 6 artists covering each.   So I broke this down by song,  So you are getting an installment of this review for each song.  Though when we get to some of the deeper cuts there are only a couple versions so we will double up when we get to that point in the album.
I know not to expect anything from Cage the Elephant as they are the kind of band I automatically want to turn the dial on when I hear them on the radio. They live up to this expectation, though moodier than just being frat boy drinking music.  I appreciate what Vishal Dadlani does with his voice he goes from a lower Nick Cave croon, to more of a pop belt with a great deal of soul. I am not sure the arrangement does the song justice , but he can sing.

So far Diet Cig does the best job, even though they are a very alt poppy 90s homage  They are more of a indie rock band with sugary female vocals so stylistically at odds , but head and  shoulders over the terrible track by Flatbush Zombies, where they sample they song then go off in another direction that has nothing to do with the original and is just another hip hop track, which really has not place here. I first thought Latin pop duo Ha Ash, was a country singer. They work off the ballad side with little in the way of power to it, though more power than the whiney ass singers that come after them.

The singer from the Mexican band Panda tries to whine his way through the song and the results are lacking at best. The eunuch Moses Sumney warbles into the song with suck little support to his voice it is pathetic. Not sure what the instruments he is singing over are even doing. He whispers as much as he sings and sounds like Prince without balls. So given how badly things go I guess Diet Cig or Vishal is a good as it gets.

Email ThisBlogThis!Share to TwitterShare to FacebookShare to Pinterest
Labels: Metallica, the metallic blacklist