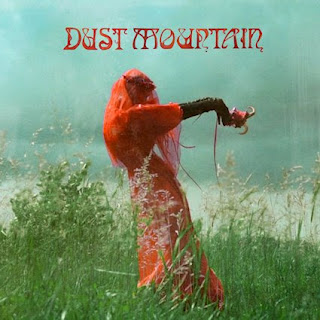 From Svart Records who is always worth checking out when ever they drop me something. This is darker psychedelic rock with a 60s vibe. The understated female vocals work really well. This is a side project of  Toni from Oranssi Pazuzu. I like the very trippy vibe to the first song that sucks you into the kind of hypnotic sonics not unlike places Swans used to tap into . It is heavy but not metal. The vocals are being handled by his sister and even the drummer from Hex Vessel is behind the kit for this project.  So hypnotic that while left to play the songs glide by rather easy on your ears, but require me going back several time to get a firmer handle on what is going on. At times there is a loose jammy feel, thought the vocals tend to pull the focus together. The second song , in some ways reminds me of the Cocteau Twins as things are allowed to dance around with an intangible atmosphere. Spellbinding in the sense it whisks you way to this surreal place.

While the fourth song digs into a more driving rock like dynamic as it unfolds, the more moody "Margaret" gets lost as it sits between the second and fourth song. The harmonies are tighter and darker. It is a very interesting excursion . It is psychedelia but more like the Doors than some of the other places they took you on the first two songs. The fact we have female vocals here kind of diminishes the Doors feel. But it simmers in a similar way . It drifts and soars as well. If you do drugs this would be the time to do them. Funny enough the first lyrics I key in on are during this song and about dancing with the devil. The guitar tone changes to something with in common with post rock on "Village on Fire". The jammy under current still abounds. The dynamic shifts of this song are perhaps more noted. With lyrics touching on contemplating what you left behind , this is after the village has been burning awhile.

There is a much more ghostly mood to "Holy Equinox" This is contrasted by "Apollo" which has a heavy bass line leading in then the songs fades into a more folky part, though it is all very fluid. They end the album with the more folky and jammy "Bird Hymns" . This brings back some of the more 60s feel the first song had .Sax wanders around the corners of the song, and there is more of a classic prog feel. I will round this up to a 10, as it defies genres, while wistfully creating it's own sonic wonderland that s familar enough to moody souls in the shadowy places.