the Metallica Blacklist- pt 6- "Nothing else Matters" 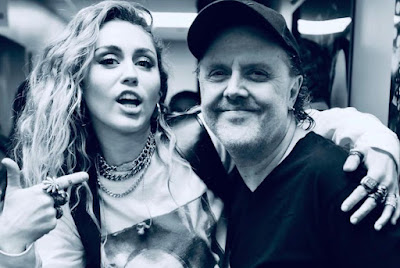 There are 12 covers of this song, that is ridiculous. That is an entire album of people covering this. There are four really strong versions, the other eight are pointless. The first solid one is from Phoebe Bridgers. If you are regular reader of this blog then you know I am a fan, there are a couple people who also cover this that I am a bigger fan of, but she is one of the four best on here, even if it is not the most powerful vocal version. The version that follows is going to be the most recognized and get the most airplay it is also one of the best. It is from Miley Cyrus. Sure she shows her ass a lot, it is a nice enough ass, so i appreciate that but she can sing her fucking pantiles off, so should not be judged by how she carries herself in the public eye. She almost has an unfair advantage as Miley has been doing this song live for over a year. Se I told you , don't judge her. This might be the best version though one other version is neck to neck with her, we will get to it soon enough.

I love Depeche Mode, but Dave Gahan's version of the song sucks. There is no emotion or shit to it. Mickey Guyton, who is a big deal because she is a black country singer, offers up something that is like a sound track for a CW show or at least the dramatic conclusion, she doesn't come close to Mliey as is very generic.  Speaking of generic Dermot Kennedy , goes through the motions in what might have worked on a show like the Voice, as he sings the right notes , perhaps too right with little balls. Chilean singer proves she is better at getting naked to shock people  than covering Metallica.  What works for Miley only works when you do it right. Russian pianist Igor Levit, is talented and does a good job with what does which is a solo piano version , but did we need another ?

My Morning Jacket's version works as they retain a firm hold on what they do, but you can tell what song this is , other artists tried to give their spin on these songs and it just did not work as well, they are also better song writers than those artists too, so there is that. Until the wimpy male vocals come in PG Roxettes version almost works. Darius Rucker's version is well Darius Rucker, who has been pumping out stale from the box radio trash since the 90s, so he has that in common with Metallica I guess.

Chris Stapleton is the only artist who rivals Miley's version, in both passion and vocal power. I wish he put this kinda feel into his more recent material. He simply kills this , this is only the second time I have felt it has been a tie. Oh yeah some lame bastard called Tresor sucks a dick while trying to do the song.