Portrait : "At One With None" 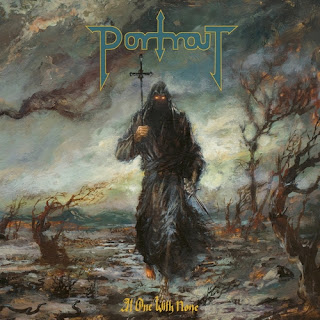 It's no secret I do not cover a great deal of power metal here. This might seem odd, considering that Iron Maiden is one of my favorite bands. King Diamond is a well, which is why I originally checked this band out. Though they feel much more like Iced Earth to me than Mercyful Fate. I guess I went into this hoping for something more like In Solitude. Sure he uses a falsetto yodel, but does not blend it in the same manner King Diamond does and seems more influenced by Rob Halford  or the singers who followed in Rob's boot prints. The vocals are just fitting over the guitar rather than forming melodies that are memorable as anything King or Rob would do. You can hit the notes , but at the end of the day , what makes you want to listen to the song again? This is big and epic with a gallop that has balls to it, but it will not hold my attention for more than two songs on that as it's only merit.
The guitar sound is dialed in as good as you can ask for from this sort of metal, making it better than most power metal on those sonics alone.  He pays more attention to his melodies on "Phantom Fathomer" which makes sense as it is one of the album's singles. The 80s metal vibes are alive and well,. but work in context of the power thrash going down here. There is some of the higher falsetto but the shrillness of it still reminds me more of Iced Earth than Mercyful Fate or King Diamonds solo work, perhaps this is because it lacks the mournful midrange, and has a less ghostly sound. This is not to say midway into "He Who Stands' they do not make a more obvious stab in this direction, it just doesn't stick. While it might not measure up to the King that doesn't mean it is not an improvement over the previous songs.   "Ashen" taps into the more theatric King Diamond like sound. His vocals however are much more straight forward and do no go into characters. He is more of a an old school Geoff Tate disciple.
By the time we get to "A Murder of  Crows" , I have begun to get bored as they are getting mired into the kind of thrash hybrid that bands like Sanctuary and Helstar have already done better decades ago. There just are not any hooks to make this memorable.  If I thought I was bored on that song little did I know how tedious the song after would be as it is more of the same.   They thrash the remainder of the album leaving a few darker chords to ring out on the last song. Musically it is well done, though I think they are uncertain of who they are when you strip the influences away, but overall I will give this album an 8, which means it is in the upper tier of power metal so far this year.
Posted by Wilcifer at 7:28 PM