Wolvhammer : "the Monuments of Ash & Bone" 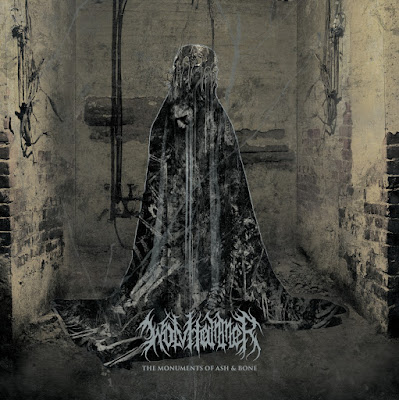 These guys are intermingled with many other American metal bands some more blackened than others. The members play or have played with Abigail Williams, Skeleton Witch, Chrome Waves and Nachtmystium. The first few song have a mean spirited mid-paced rumble to them. Almost having more in common with more aggressive strains of sludge than black metal. On the second song the vocals take on more of a scowl. A guitar solo surfaces on the second song proving these guys can be as fleet of finger as needed. The rough edges of their sound certainly warrant an Entombed comparison, though there is less of a death metal edge to their sound. Sung vocals come in when the song slows midway through, which is a nice touch. They are low and mournful, almost Burton C Bell like.

In comparison "Law of the Rope" is much less interesting in it's deliberate throb. The vocals are a roared static sound. The solo is pretty cool though and they do stumble into some blast beats on the way home."Bathed in Moonblood and Wolflight" is a great title. As a song it's pretty decent too. It moves at a steady gallop. It good but is not the band's best song. I find increased feeling in the atmosphere to "the Failure King" more interesting. Then the are back to more of  an Entombed styled thrashing on "Dead Rat Rotting Raven". One of the album's most interesting moments is the last song which is also it's least heavy. There is a cold melodic longing to it as clean vocals float against the bleak gloom of the guitar chords.

I'll give this album an 8.5 as I am most impressed with the fact that continue to show the maturity to expand there sound and bring in more melodic elements. This sets them apart from many extreme metal bands who find being crushing to be more satisfying than writing songs and growing with their sound. That is not the case here as they journey they take you on reflects the journey that is their body of work.This comes out May 4th.