Looking Back in Anger at Tool's "Opiate" 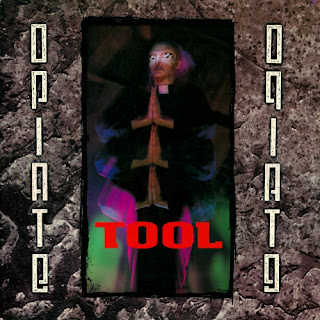 With a supposed new album coming out this year. It begs the questions like...does anyone care? ...are they even relevant in today's musical climate, leading to ask "How well have those albums held up in the first place?" Now that is precisely the kind of thing I answer in the Looking Back in Anger column, so I am taking their first ep off it's pedestal to give it a critical listen. When this came out it was heavier at the time than it is now. I could tell that on "Sweat" the first song that bore the ghosts from the 90s in it's production. The picture the lyrics paint were strong enough to compensate for any elements that struggled to drag it out of the 90s. "Hush" is much less interesting on a lyrical level , though more aggressive. The bass playing on this song stands out more, though I do not feel it's as strong of song as "Sweat".

There is a stiffer militant anger to "Part of Me". The tightly chugged riff is a prophetic glance at what was to come on "Undertow". Danny Carey's drumming was not as nuanced as it would become on "Undertow". The taunt guitars are actually the song's strong suit, as Maynard's vocals hand really close to the riff. He does display a strong sense of dynamics, and though it's not his best performance on this album , it is more nuanced than the first two songs. Then comes the two live songs. "Cold & Ugly" reminds me of what my high-school girl friend said to me when she brought this album home from the radio station she worked at. "You'll like these guys they are like a more metal version of Soundgarden. I can hear the grunged out sinew pulsing on this song. Of the two songs "Jerk Off" is more like the sound they would further cultivate. Maynard's vocals are more melodic. Danny Carey also begins to really step up his playing on this as well. Not sure how a lyric like "maybe I should play god/ and shoot you myself" would sit with the p/c police.

Of all the songs the title track holds up the best against the band's current body of work. The vocals are the most melodically sung, and lyrically the stab at religion is well done. The production is a little dated in a few places earlier on in the album so I will give this one a 9.5 , it's more straight forward on a metallic manner which sometimes gives it more of a stiffness than the serpentine groove to come on future albums.