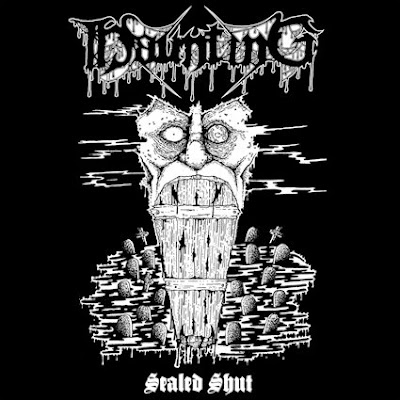 This first saw a tape release four years ago and is now being re-leased by Boris records. This release is of note in 2018 as before Scott Taysom formed Cloak , he was in this band. The first song shows shades of black metal influence , but it largely death metal. The vocals are a dry metal metal growl that is articulated enough to remind me of early Sepultura. The drumming is what held them back from really coming into their own as a death metal band as it's too rooted in punk. This can be a problem for a lot of bands that came from this  warehouse scene as the East Atlanta music scene which includes Little Five Points has always been rooted in punk so most Atlanta metal has leaned towards thrash since it's only a few steps away from punk.

"In the Mist" finds the band going on a much more straight forward death metal route that the majority of the EP finds itself following . Straight forward to the point of being stiff until they come to the Slayer groove of "Buried In Misery" . When the song accelerates, it's feels like they are running down a hill too fast. When they slow down and give the riffs room to breathe what they do certainly works better. At only four songs what are all briskly paced it might take another listen to absorb the finer points. Then it will become further cemented how this band worships the earliest days of death metal where it had not fully formed it's identity from the thrash roots it sprung from. There a some moshy break downs, placed where those typically go some where after the solos.

The more thrash of buzz saw to the gallop of the title track grew on me a little more. Lyrically it's pretty unimpressive. The lyrics are more articulated than your average growl. With more listens the Slayer influence becomes more pronounced. We are talking "Show No Mercy" era. Repeat listens did not help all the songs as "Buried In Misery" became background buzz despite the Slayer groove that originally caught my ear. It sounds like the bass might be doing something interesting , but its' buried so deep in the mid-range thick mix that it's hardly audible. With better production and drummer these songs could be taken to the next level, but this band has broken up so it's neither here nor there now. I'll give this album a 7.5 , which questions calling it an Atlanta classic, but if you are into collecting underground metal releases from this kind of death metal then it's worth having in your collection.