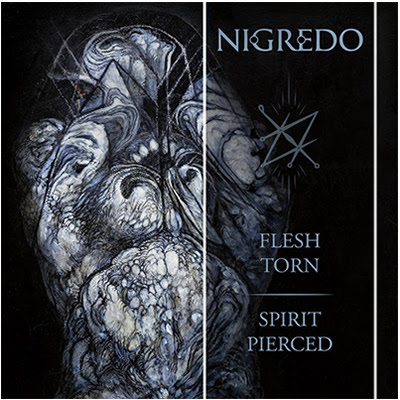 This Greek band features members of Ravencult. They ride a fine line between being black metal and death metal, to the extent that they remind me of Goatwhore. The drums are fucking insane. These guys are aggressive as fuck. This can be their strength and foreseeable weakness. I can feel the momentum of the second song kind of numbing me a little as it doesn't match the urgency of the first song. The guitar does have a dissonant pulses which is the most black metal thing about these guys. Though the vocals have a coarse command similar to what Marduk does. There is more of a gallop to "Chronzon Possession" which is needed to switch things up. They do tend to default to blast beats . The best moments is when it is given room to breathe, so the song can briefly take on more of a angular throb..

There are moments like those on "Mental Glimpses at Cosmic Horrors" when you can hear how far reaching Watain's influence is beginning to be on black metal. When they become too reliant on their need for speed is when things begin to get boring. Even the shift into a catchier riffs is just a diversion. It's official I am bored by the time I get to "Sons of Worthlessness". They get into a more punk rock like beat that I don't like. It's too right up in your face at the same speed they have maintained for the majority of the album, so it's beginning to get stale. "Towards the Monolith" tries to compensate with it's double bass. The manic energy of their incredible drummer continues to carry the frantic mood. The guitars make another attempt in creating a melody, this time you can also hear traces of Immortal in their playing as well. The vocals which are a coarse mid=range bark more than a full fledged growl stick to the one dimensional scowl in their raspiness and is one constant factor that has given this album a rather limited ceiling dynamically.

These guys are more than competent musicians. Even their arrangement prove they can write a song if they want to , but fall into the trap of many extreme metal bands and allow intensity and sheer weight of their heaviness eclipse the point of song writing. The trash in what they do reminds me a little at times of a more metal and less sonic Mutilation Rites. This album gets a 7 due to the fact they are so good at what they do. What they do just falls a little flat for me and doesn't distinguish itself from being just another black metal ish band.