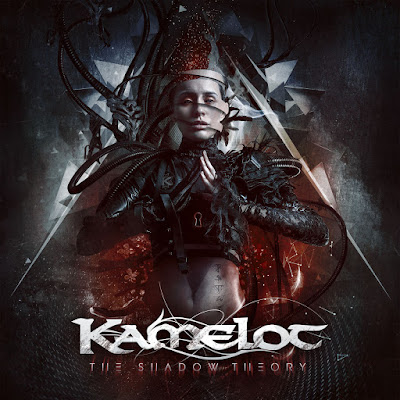 The album opens with "Phantom Divine" which is certainly good enough to help me continue to get over the fact Khan is not coming back. It's pretty much what you want from Kamelot other wise. Not their heaviest song, but not weighed down by an over abundance of symphonic fluff. Not that the symphonic elements are not in the synths lines, they just don't obscure the fact this is a metal band. Karevik gets credit for a very nuanced vocal performance that is high lighted on " Ravenlight". This album marks the debut of new drummer Johan Nunez from Firewind / Nightrage. He has a punchier double style. They wrestle with wanting to get heavier and the generals pit falls on modern power metal on "Amnesiac". They combat these very same power metal moments on "Burns to Embrace" with a quirky almost folk metal syncopation in places that feels like they just put more thought into this one. The guitar solo is very tasteful for this sort of thing as well.

For this kind of melodic power/ prog metal the songs are very compact. They throw a lot i in under the six minute mark. "In Twilight Hours" feels like it is going to be too much of a sappy piano ballad going into it.The female vocals that trade off with him don't help things stray from Celine Dion territory. It's just cheese all the way around . I would much rather have another song along the lines of "Kevlar Skin" that than. "Kevlar Skin" has enough muscle to it's chug to compensate for the more frolicking build the song speeds up into.  I would not say this song is as good as any track off "Ghost Opera" but it works for what they are doing now. This album doesn't feel as thematic as the others. The keyboards that open the more up beat "Static" could appear on most of the songs, but lyrically they are all over the place. Its the chorus where things seem to border on being too happy. The verses are darker and more brooding then it's like they hit the jack pot at a self help seminar.  This was not an issue with Roy Khan.

"Mindfall Remedy" takes another stab at getting heavy. Here is my theory. Karevik might have more colors to his vocals, but Roy Khan had more balls. The inclusion of growls vocals in the background, is not unfamiliar to what these guys do , but I am not sure it is as convincing as what we have heard them do in the past.  As  you might know the rule around here is "cool riffs alone do not a good song make" here this could be applied to vocal phrases , as there we be a cool passage that pops in here or there on "Stories Unheard" that keep it from being totally middle of the road , color by numbers by a few degrees. "Vespertine"  finds more balls in the solo section , but is otherwise to hopeful mood wise for me to really connect to it. This persists to a greater extent on " the Proud and the Broken". It is this problem that makes me round this down to a 7.5. To put this in perspective "Ghost Opera" was a 10. Sure I have continued to out grow power metal, so some of the cheese I can stomach a little less, but these guys used to be dark enough to make me not have so say "Oh, they are good for power metal"  Power metal should be as good as any other genre I can think of a dozen awesome power metal albums this one is just an " Ok for what it is " which is still better than most modern music of this kind.