Of Feather and Bone :"Bestial Hymns of Perversion" 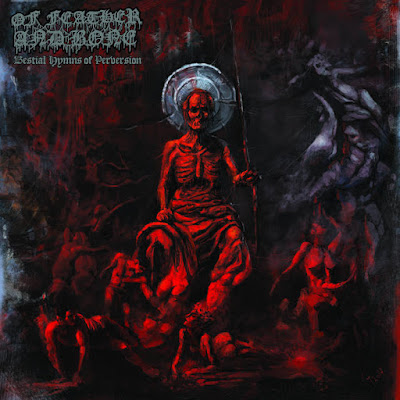 This death metal band out of  Colorado is true to the genre in that they pursue their craft with a single minded aggression. The low guttural growls falls in the Cannibal Corpse range. The guitars churn out a low frequency barrage.  This is what I want from death metal, but I have already gotten what I wanted from other bands . So after I finish being impressed by the sheer heaviness of this band I will begin to ask ...now what else can you do ? Who are you ? Where is your personality that separates you from the hundreds of other death metal bands that do this ? While they continue to hit with a ten ton hammer , they are unable to answer these questions. The lyrics are growled in such a way that they are no discernible. Even the catchier riffs could have been pulled from the death metal riff grave yard.

"Lust for Torment" just kind of happened without me realizing that we were on a different song. They go for the most low brow common denominator blasting on "Mockery of the Ascension" . The title track is even more straight forward blasting. While it's impressive these guys were about to maintain this kind of intensity, there is little in the way of dynamics. They certainly have a dense guitar sound that many bands of their ilk might envy. It is just this point in the album it's all running together. They close the album with "Throne of the Serpent". No new ground is uncovered here. The flow of double bass keeps coming.

It's generous for me to round this up to a 6, but they are good at what they do. The problem is what they do is not very original. So if you like death metal that is intense , but very average in terms if the dynamic spectrum than this will be a fine addition to your current hymnal of songs to get shitty drunk to. This album is getting a ton of buzz, but far from album of the year quality and it's hype is almost as heavy at it's metal. Released on Profound Lore.