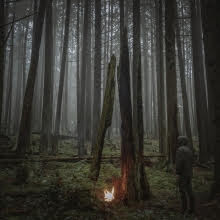 Canadian sludge punks Baptists are back. The first two songs are more punk in form as they are under two minutes. The first more original in what they are trying to do though it doesn't feel like a fully fleshed out concept and the second song is more formed but sounds like feral distorted punk, which is what they are going for but begs the question...what are they doing that we have not already heard hundreds of other hardcore bands do ? Converge would be the first who comes to mind that fills this need for me personally and they do with more darkness and sonic intensity. So by the time I get to the title track I find myself asking what do I need this band for ?  There is not a resounding answer. There is a little more roar to the drive of "Gift Taker", but nothing that sets this apart from other bands doing similar, as from the aggressive density which they pursue this.

"Capsule" is the first song that breaks the two minute mark. The first minute is pretty much build. There is a more powerful almost Jesus Lizard that rumble to the stomp they finally settle on. There is a more musical quality to the tension created here that makes it the first song to really grip me. "Outbreeding" finds them rushing back into a more furious hard core take on punk that comes fully equipped with gang vocals. They pursue this further in a more Converge like direction with "Vicarious Trauma". The guitars are more interesting the anger in the assault unleashed here is something I have already heard Converge do better. They do implement some interesting elements of atmosphere on this one which is an improvement.

The angular jerk of riff to " Victim Services" keeps their momentum, but the vocal really begin to feel like a one trick pony here. "Indigo Child" keeps the rabid attack going for the throat. But this kind of single minded offense is one your ears are quick to throw up a defense against. The more melodic passage this evolves carries over into "Eulogy Template" that follows. This gives them more breathing room to prove what their guitars are truly capable of. The vocals can't really do much more than what you have already heard from them.The last couple songs are just marginally more refined versions of the same kinda mad dog metallic hardcore these guys are normally banging out this time the production is just better on this album. They can polish this sound they have and are good at what they do so I will give them a 7 as they accomplished what they set out to do , I just already own albums that meet that need. This album comes out May 26th on Southern Lord.