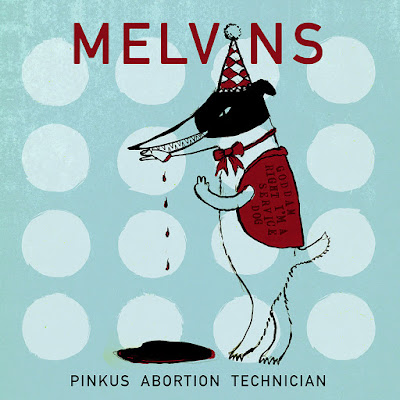 Buzz and the boys are teaming up with Butthole Surfers bassist Jeff Pinkus for this album that puts an extra coating of weird on things. The Melvins have been heavier band that hipsters from many decades have been able to embrace, despite the band being not so closeted Kiss fans. Their love for Kiss comes more to the forefront on the cock rocker that opens up their new album. Two and a half minutes into this there is a weird break in the song, where there is a spoken or almost preached section about Florida. It kills the smooth rocking momentum the song had. "Embrace the Rub" is more punk, though much like the album title there seems to a Butthole Surfers theme here since Pinkus is on board. "Don't Forget to Breathe" might be my favorite song on this album thanks to the bass groove and the extra put into the vocals.

I had to go back an give "Flamboyant Duck" another listen to form my thoughts on it. I guess what I don't like about it is the fact it reminds me of the Butthole Surfers when I thought they sold out. It's not a bad song, but not the album's strongest moment either, kinda grunge lite with a touch of country. "Break Bread" is a better song with a 70's Comaro rock vibe. This continues on with their cover of "I Wanna Hold Your Hand"...if I need to tell you who did the original then go ahead and kill yourself. "Prenup Butter" has a bit of a psychedelic edge to it.Three minutes into it the song gets a little jammy. They close the album with a cover of "Graveyard" from "Locust Abortion Technician" and when you are covering a song with a member of that band in your band you are going to have the unfair advantage.

This album takes time to grow on you. It's more rock and roll than metal or whatever their heavier side might be. It does continue to fuel me missing the Butthole Surfers. The winks in their direction are at the heart of this album's core when they are not getting their van airbrushed. I'll round this one up to an 8.5. If you are a fan then this falls right in line with the long strange trip they have already taken you on.