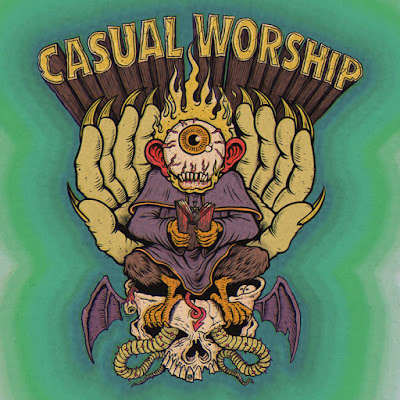 This is a weird one that reminds me of the Butthole Surfers, if they had more of a middle ground between "Locust Abortion Technician" and "Independent Worm Saloon". The album opens with more of an apocalyptic crust aggression. This might fool you into thinking these guys are a metal band. Truth be told you begin to hear that much like the Butthole Surfer's it's only a dynamic they use. "Kevin Bacon" proves this point as the drums are way to peppy for metal and there is more of a reckless punk attitude. In fact the song itself is a little too happy for me.  "Crawler" finds things darkening back up again. The opening guitar riff being more ominous. There is more of Mudhoney grunge feel. This could have fit right in with some of the cooler music that came out of the early 90s. The spastic punk they launch into before giving more of a hammering on "We Like To" feels more like an idea for a song than one full realized. They use their frantic energy to push you past this fact.

They continue to try and bull doze past you with manic glee until it comes to the more commanding bass line of "Human Vapor". The vocals are obligatory mumble in the background. They snarl out with a crazed desperation when the song explodes as the brooding verse indicates it should. "Slop City" kinda rants with a bouncing dissonance much like the previous songs. They are not the Butthole Surfer in the sense that the Butthole Surfer could mess with you and make noise, but put it in the context of a song that you not only wanted to listen to but was not like their other songs, as things become a little uniform here.

I like the thought behind "Quitters Inc", as it's one of the album's better songs. I'll give this album a 7.5. These guys have a lot of potential and when they hit the mark it's a fucking bulls eye, meaning maybe two out of eight songs are stellar, leaving the others to sometimes carry great moments and at other times descend into rambunctious noise. To some extent this is the point , though I think some maturation in the song writing process is in order.