Shrine of the Serpent : "Entropic Disillusion" 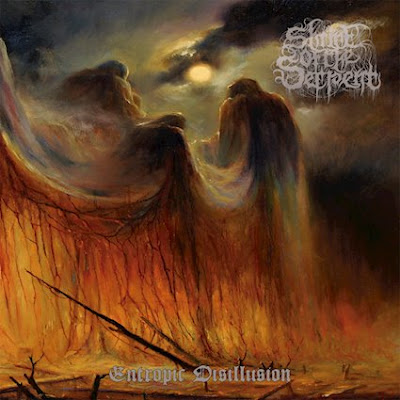 The death doom keeps coming. I can tell when a sub-genre is gaining steam as it starts surfacing in more bios from p/r companies whether it applies or not. In this case not as much as they might want it to. This band features old drummer from Graves at Sea, so that pulled me in. I like the fact there is a very dismal mood and it's more on the doom side of the equation than the death metal one. The first song is an instrumental. It does a pretty good job because I didn't begin to wonder when the vocals were coming in until I was almost five minutes in. There is a more delicate funeral doom atmosphere to "Hailing the Enshrined" .  It does build up into a more sludge like pounding, while still retaining the fact it is doom.

They do tap into more death metal on "Hope's Aspersion". This is also where it begins to become a little bit of a blur to me and the steam rolling density makes it fade more into a passing white noise rumbling by. There use of vocals feels like a more death metal like take on the roar Neurosis used to use."Desecrated Tomb" took a few listens for me to really pay attention. It is more doom than not, though the band's previously displayed grasp of doom came across as more compelling. "Epoch of Annihilation" is another instrumental, thought it is armed withe more twists and turns , making for a more interesting listen than the first one. "Rending the Psychic Void" closes the album. It moves at a sluggish throb riding the line more between doom and sludge than death metal.

This is only their debut album, and while they are veterans, playing these brand of metal with these musicians is still a work in progress though one that is off to a good start. I think they need to go with their heart and plug into some of that more melodic sorrow they capture at the beginnings of songs. More vocals might be something for them to think about as well, though growls tend to be more of an after thought for most bands. I'll give this one an 8, it comes out APRIL 23 on Momento Mori.