How Metal is Kill the King ? 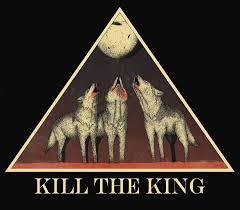 Destroyer 666 was recently targeted in the manifesto of  the Kill the King group. To call Kill the King a movement might be a little bit of an overstatement as they are an offshoot of the #metoo phenomenon, which has already lost steam after Hollywood blew it's wad at the Oscars. They claim Destroyer 666 epitomizes the kind of "toxic masculinity " that is keeping these women marginalized in the metal scene. So to be part of a metal scene, you would assume one would have to be metal. That's why I am asking how metal are they ?

Of course Destroyer 666 lead singer KK Warslut retaliated in response to this attack. This brings up the question would you want to listen to a metal band who took shit from people? Metal is supposed to be about giving the middle finger to people who give you shit so Warslut is consist with who he seems to be. While it's fine these girls are having their Twisted Sister moment what kind of metal do they want to be part of if they want it to be free of toxic masculinity after all what part of metal is not the exaggerate Id of a teen age boy?When Spinal Tap was asked why their audience was made up of teenage boys, they replied 'Because the girls are afraid that we have armadillos in our trousers."

I cover all kinds of bands and artists at this blog. Regular readers know some of my favorite artists are female singers even in metal Julie Christmas, Fear of God, Carla from Sleepy Time Gorilla Museum, Kylesa, New Years Day. It wasn't until the Runaways in 1975 that girls joined the party in hard rock. Hard rock which turned into heavy metal was spawned from bands like Led Zeppelin who would have made Caligula blush.Then there was the love gun of Kiss, Gene Simmons has always had an interesting relationship with women. What  about the bands who influenced Scandinavian black metal ? Bands that every one is in agreement are metal. Lets have a look

Black Sabbath- When women came into the picture in their songs they were either evil or not understanding the plight of Ozzy's mental health. Ozzy in his solo work exclaimed things like "Dance for me bitch" on his "No Rest For the Wicked" album and later became a sex addict.  So he might be considered a misogynist.

Iron Maiden- If you are not down with Iron Maiden you can hardly be metal. Right?  When not telling you to bring your daughter to the slaughter, they mainly depicted women as whores.

Celtic Frost- Normally Tom Warrior is waxing esoteric , but on the "Cold Lake" he had song like "Dance Sleazy" which is fairly tame by Guns N Roses standards. Really he was no more objectifying than what the status quo of 80s hair metal was at the time.

Mercyful Fate- "c-u-n-t...that's what you are to me" croons King Diamond on the classic "Nuns Have No Fun" about raping a nun.

Slayer- Most of the time it's from the perspective of a serial killer  or a corpse that is getting raped, though on "Live Undead", Tom Araya announces that "Captor of Sin" is for all the little cunts that like to spread their legs in the night.

These are just the facts I am reporting. So if  Destroyer 666 is toxic are they doing anything different from the bands that came before them ? And if you are aren't into Maiden, Slayer. Sabbath and Fate...then you are not into metal. After all they are the bands this house is built upon. I know in the past ten years there have been a ton of punk kids who got into metal cus it was cool. Did you know what you were getting into.

Now the reality of this is much different. I went to see Destroyer 666 open for Slayer and they were very well behaved. The came across much like the trash bands I saw in the late 80s. The females I spoke to after the show had a very positive response to them in fact one friend of mine said  she hope to catch them doing bicep curls outside of their tour bus, so the fact is objectification in metal has always been a two way street.

As a parent of an 8 year old girl, I considered what if she one day decides to listen to good music I'll  probably take her to her first metal show. Then if she decides to hang out with that crowd or any crowd  be it punk, goth, hip-hop or country, I am not worried.  I have taught her to be her self, but know you ask for what ever the universe gives you be it good or bad. You teach people how you want to be treated. You attract people who are mirrors of your own issues If we find ourselves having similar interactions with people we must remember if it happens twice it's a coincidence, three times it's a pattern. We can choose to be victims by dragging yesterday into today. Since it is no more real than tomorrow, none of which are happening now.  All thought is creative, if you are looking for toxic masculinity that is what your perception of the world will be and what you will attract.

I am not apologizing for what metal is. That is the empowering barbarian energy that flows through Manowar songs as it does Conan comic books.Why do vikings resonate as such a prominent figures in metal imagery? It's the wild strength that flows in the music. Listening to Iron Maiden is no different, then  If my daughter wants to read Conan comic books, there flows a current of energy that she can expect to find there. While this "movement' is just another passing hashtag in the wind, I feel if I don't ask the uncomfortable questions then who will? In the mean time we can wait for #pummelthepimp movement, since trap rap tends to facilitate and even worse culture for women.