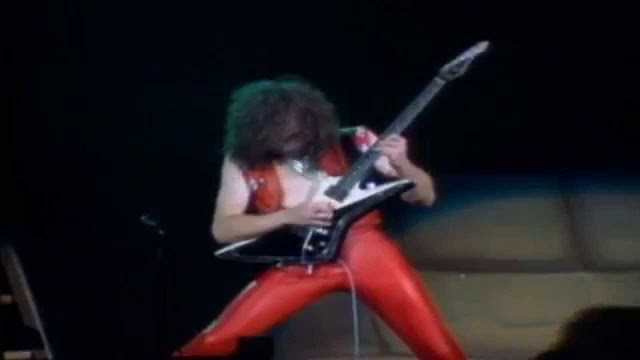 How memorable is your work? Joey would answer very, which is why he is hanging tough along side guitarists who might be more technically sound. He is like the hard core little brother of Kirk Hammett the way he works cool melody lines into their riffs.

The problem with most death metal that makes it not worth a second listen is the guitarists all go for maximum speed and density, think being influenced by Slayer instead of Incantation is expanding their horizons, and play variations of the solos found on "Altars of Madness" . Eyal did not follow the status quo in that regard. He brought a hooky sense of groove to his band and layered it with neo-classical musicality that did not demand a pirate shirt to be worn.

He plays on the first 3 Dio albums...end of story

There was once a awesome band who lost their guitarist who crafted their best work, then became a variation of Spinal Tap.

Helped create grind core. Napalm Death brought the more spastic elements, while his band brought the more gore ridden death metal elements to it. The riffs are so mean they would eat you if he was not a vegetarian.He proves brutality and melody can co-exist.

This British gent brings a dignified and progressive quality to his band's brand of black metal that almost makes it steam punk in the nuanced Victorian quirk it possesses , so to make sounds that are visual is a feat.

Got his start playing with Steve Vai. He then thought he could keep up with the drummer from Dark Angel. His various projects have covered a broad expanse some more metal than others. He has a distinct tone.

He originally joined the band as a bass player and switched to guitar. As his band's vocals shifted their focus and added melody he augmented his playing to do the same incorporating a David Gilmore like sense for less is more.

He brought a degree of musicality to funeral doom that has been rarely rivaled in the genre. This tone grasps the kind of despair needed. He paints sonic picture rather than just overpowering you with a wall of feed back and distortion.