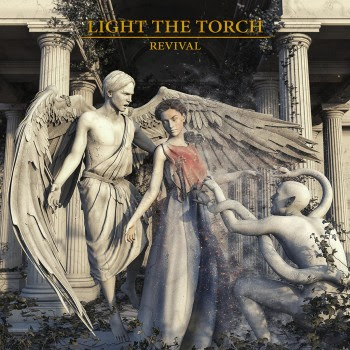 How is Howard Jones doing now that he is not in Killswitch Engage? Well that depends on what side of the band did you like?


A- The side that owed more to 80s thrash metal than Myspace?

Or B- the big hooky choruses that made them more accessible.

If you answered B, then you can go check your friend's list on Myspace and masturbate to the girls that never talked to you on in the first place on there because they were porn robots. Now for the rest of us who like heavy music. This album sounds more Sevendust than Killswitch Engage. This gets worse with each passing song and it's pretty bad by the time we get to "the God I Deserve" . The only thing that makes it easier to listen to than Sevendust is the fact Morgan Rose is not doing his annoying drill Sargent bark. The first two songs are well written in the same way pop songs are well written with "the God I Deserve" leaning on the chorus too much. I retract what I said about the Morgan Rose vocals as they come in , but in the form of gang vocals on "Calm Before the Storm". Yes, the lyrics are as bad as the song titles suggest. I just finished reviewing the new Kamelot album and these two albums have more in common than you might expect. This is not much heavier than the new Kamelot. Like the Kamelot album, the rule changes from "cool riffs alone do not a good song make" to " vocal hooks alone do not a good song make". Vocal hooks alone might work better, but when the riffs are just generic hard rock wanting to be metal chugging, then they fall flat.

The albums pop sensibilities get to be too much on "Raise the Dead". To the point that I begin having to fight the urge to fast forward past this. That makes this song what I call a "Fast Forward Classic". "State of Disbelief" could very well be Trapt or Breaking Benjamin. The harsher screamed vocals are very sparse. Then the keyboards come up in the mix as the urine starts to flow. The rest of the song begins to become just bookends for the formulaic chorus. "the Great Divide " shows that they would not mind being Faith No More, the drums really drive this point home. Sure it might be better than half the songs on that last Faith No More album, but that's because the guitars have distortion on them. This might be the album's best song. On  "the Bitter End " they are like "Oh wait aren't we supposed to be pretending we are a metal band?" So they drag out a half baked Slipknot riff.  It's like filler from Slipknot's last album, just less angry. It's more of a nu-metal break down than a hard core one when it comes. You realize that the only reason Killswitch Engage was worth a shit with either singer was because they had the other half of Overcast who didn't go on to form Shadows Fall. I can't imagine Shadows Fall are fairing much better.

Mainstream metal satellite radio shows will eagerly play "Lost in the Fire" ,hell normal suburban rock radio might play it for the people who still listen to the radio out in the corn fields. The half time part is probably the best thing about the song. They get heavier on "the Sound Of Violence". Thankfully harsh vocals dominate the song. This is coming from someone who prefers singing. It feels like they are trying to redeem themselves in the albums more aggressive third act. Though the melodies on "Pull My Heart Out" somewhat run of the mill for Jones. By the end of the song it sounds like heavier Sevendust. I'm kind indifferent to it , but it's better than the first half of the album. I am ok with them backing off with the heavy if they do it in the way they do to close the album with "Judas Convention". It does veer into nu-metal, but in a way I can deal with. There is a "King For  Day" feel to the song and I like when Jones explores a lower croon. I'll round this down to a 6.5, as it's very middle of the road, though it does begin to get better towards the end.