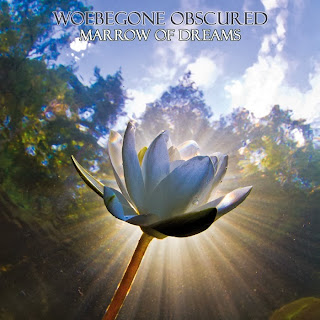 This Danish band has been around for ten years and finally offers up their second album of their decade together. This delay is credited to the same subject matter of this album that initially caught my interests as it was written during one of the members struggle with mental health issues. While it isn't more melancholy than any other funeral doom I have heard, it is well written and preformed.Draining the same vein as Ahab, there are a variety of diverse vocal colors on the album. The vocal variety  makes it a worth while listen, not just droning on the low guttural  death vomiting of most funeral doom, though the low roars are there.

Like most funeral doom the songs creep at a long winded pace. The opener is 13 minutes, they don't take too long bringing their dirges to life. It only takes a couple of minutes for the vocals to moan in and a plodding groove to develop. The vocals often remind me of a less soaring Pallbearer, though at times they do gracefully go into a more tenor register.  The guitar harmonies take on a more traditional metal approach, though contrasted by clean guitars and periods of ambiance.

There tends to be more movement, with the band staying a few bpm's ahead of their peers in the genre.The clean vocals create most of the atmosphere here. The hesitation to create the kind of deathly stagger onto the next chord typical of funeral doom doesn't show up until the final third of the first song, but their is also no shortage of Candlemassive riff to chug through this graveyard.The guitar solos take a more classic metal approach, not overly reliant on shred.

"Vacuum Ocean" begins with the sounds of waves lapping at the shore. The guitar is delicate and distant, until it punches in with depressively slow chugged punches. Here they are more like Evoken or Mournful Congregation, though I would say less sonic and more metal than the latter.The vocals on the song spew more acidic almost black metal like vomit. After the first four minutes it dies down into a passage much like the intro but with clean vocals over it. I like how they will switch into harsh vocals for a phrase and then backing into clean singing very smoothly. I think when the wave sounds are reintroduced for a third before the song dips into a more Celtic Frost like section, the effect has been overused. The tempo picks up almost to a thrash pace on a build in the songs final five minutes, but slows back down to the pace the band employs the most often.By the fourth time the water theme shows up the point has been beaten to death. It doesn't ruin the song for me but diminishes the effect.

Sometimes the only changes to what they do is an added dissonance on "Crystal Void". The pace picks up into less of a funeral march and more of a lumbering stomp.Their is a section in the first seven minutes that goes a more progressive route like Genesis or Trevor Jones' Labyrinth score. The guitar solos are given more space to wander. The more angular elements of the opening riff take a harder form midway through.The vocals take on a mourning Mayhem like croak, before the albums builds into its most death metal like moments.

There is a powerful roar to "In Suffering Darkness Dwell". This song seems to take longer than the others in finding it's footing to set out on new ground. It might be one of the albums heavier tracks, but sacrifices their knack for eerie melodies in order to claim that crown. The guitars create the most melody as they take on harmonized layers.Sure the growls are meaner and the punches in the song have more bite to them, but I am not convinced it's their strongest suit.Its seven minutes into the song before the reverb drenched guitar comes in to bring more darkness. The momentum does build nicely by the songs final act though almost more sludge like in it's weighty intentions.

The album closes out with the second longest song"Into the Mindcloud". Like the bulk of the album it sorts more delicately. The build begins to brew by the three minute mark.The lower death metal vocals on this album that this song returns to are par far the course, but well executed.The pace chugs to life six minutes in, with clean vocals floating in along with guitar solos a minute later. More death metal elements gurgle up on this one as well. More melodics moments to see the bleak light of day, with deliberate solos weaving out of them. There is a lot of ground for the band to cover here and they take every opportunity to paint this song with a wide array of guitar textures. They even come to jazz like place further into the song. When you write twenty minute songs you better have some prog in your background.

Hopefully there will not be as long of a wait for their next album as these guys help support the funeral doom genre with some tremendous guitar playing and a welcomed addition to the genre. It combines many of the elements which have worked well for their peers and collected them into this shining slab. I'll round this up to a 9 as I can see it growing on me.