Culted: Oblique to All Paths 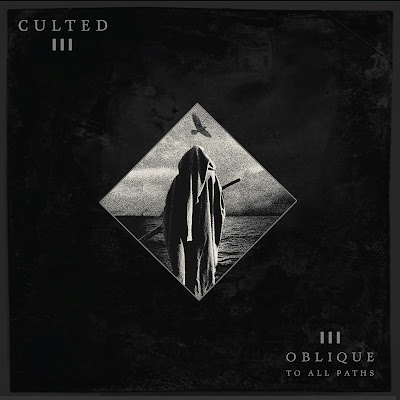 It's impressive after hearing the twenty minute opener of this album, that these guys have never been in the same room with one another. Blackened doom might be the best description of what is going on here. It is drenched in dark ambiance. So these monolithic riffs were never meant to be preformed live.

The opener does giving you breather of chords that ring out dissonantly, often fooling you into thinking the song is over before they lurch back in. The vocals stay on the lower end, a scowling howl rather than the black metal rasp. The sonic ugliness is really where I hear the black metal on this one, and death metal is too focused on the aggressive pound, though I am sure they have listened to an Obituary album at some point. There are impressive layers of guitar often with criss crossing melody lines, leaving the bassist and drummer to tie it all together.

The intro to "Illuminati" remind me of a Neurosis song, it stomps into the song in a much more sludge like manner than the previous song. The experimental sonics woven into the fabric of their song, is a much a part of the song as the crunch of the riffs, not unlike Blut Aus Nord, who employ similar terrorism tactics on their sound.A murky darkness of ringing chords floats underneath a coating of samples for the majority of "Intoxicant Immuration". Round the five and a half minute mark it rumbles into an actual song. This section reminds me of Dragged into Sunlight.

"March of the Wolves" moves in a more fluid straightforward fashion than the album has up until this point, though it is more sludge than doom as the deliberate chug. The 11 minute "Transmittal" is the albums second longest song. It is more doomy, like the other songs layered with samples more than vocals. This is pretty grime ridden doom.Midway through a pretty powerful riff stumbles into the wreckage. Its builds into a more double bass driven section.

The album ends with the filth en-coated plod of "Jeremiad". It still feels more like sludge to me than doom.Its been clear in the past year sludge has taken more influence from industrial, there is a riff at the beginning that comes close to the drone of shoe gaze but it thickens up and drags it self into tenser places.It stays pounding on the same riff for the remainder of the song.

I'll give this album a 7 , it's mean and dirty but the more experimental elements are what  makes it a worth while listen, the sludge elements make it drag a bit and of course I prefer funeral doom when it comes to slow sonic metal .