Night Sins : To London or the Lake 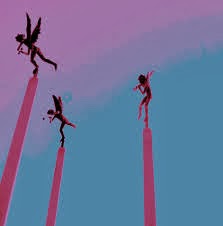 The newest album by the Philly goths has a more dancey Sisters of Mercy like energy, that was merely alluded to on their last album here it is more fully realized along with a lusher guitar sound. Lyrically there is more of a bdsm them, as tongue and cheek as it might be on " Bound Around the World" and " Dear Marquis".  Sometimes the vocal tone reminds me of Bella Morte, the twinkling guitar helps to hide this. The synths are at time more minimal than you would expect from this sort of dark wave, but overall there is a greater scope of sounds being employed here. The vocal production is also stepped up, with delay and reverb adding trippy nuances .

When they get mired in over wrought clichés, the guitar rescues the songs with it's web of melodies. The album at times begins to lean more heavily into cold wave and finds itself closer to VNV Nation  and steps away from the post- punk years of it finds it self in murkier waters. I don't think this is their strength as a band but it does reassure me that these aren't just hipster jumping on an ironic Joy Division band wagon, and this album is a rather deliberate step away from the Joy Division sound.

They journey deeper into the more cold wave direction on "Heaven In Snow" but this feels like it is more  balanced in blending this with their more familiar sound. The driving bass of death rock returns on " Neon Light Intoxicants" . The guitar and bass do must of the work as the vocals here tend to wander around. The line " All the young lovers are cold and dead" is the only one that really grabs me on this one.

The vocals on the verses of the title track display the new depth of emotion being utilized here, this album makes what you have heard from them previously seem one dimensional and they have done it with out sacrificing any of the bat cave darkness. This would keep the dance floor in motion as well as any of the 80's great they are deriving their inspiration from. This is still  to some degree derivative of their influences,  but is overlooked when you let the songs take you.

I'll go ahead and rate this one a 9.5  as it grows on me with each listen, the shift towards a more cold wave sounds at times is going to take a few more listens for me to adjust to and reminds me to much of what I see as the more mediocre era of goth where the emphasis was more on the dance floor fashion show than the instruments being played on stage.