Pinkish Black :"Razed to the Ground" 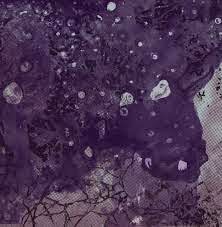 The Texas band comes back weirder with this one. The angular prog bass line of the opener starts the space rock off. I mean the term death rock gets thrown around at times with these guys but on this album I hear more cosmic stuff like Hawkwind. The vocal are more of a swirling galactic chant than the type of singing from the first album an the drumming is running in crazy circles all over the place. It's a sonic feast, but the song writing is then given room to wander into more of jams than actual songs.

"Ashtray Eyes" takes a good minute to land. The keyboard start building up the riff in the distance. This is way more Pink Floyd than I remember the last album being. It more Obscured By Clouds Floyd though, which is good as that was my favorite album to get high to back in the day. The vocals take on a more focused croon here, and we have the making of a real song. When the drum really kick into a groove , I am pretty sure its not metal but something of a more more perverse beauty.

There a more Killing Joke like stomp to "Kites & Vultures". This builds into drum spasms and the tribal throb marches on. Though this album is less metal it still carries an attack to it that would appeal to metal heads, especial those who like industrial. The title track carries the charge forward , the groove is almost more Tool like, the synth sound and darker vocals that bubble up from the nebulous realms create a hypnotic  tapestry of sound while forming a web-like song structure.

The bleak piano lines that open up " Bad Dreamer" create a lingering  mood  that almost feels more like an interlude,  as the crushing doom like bottom end doesn't smack down until two minutes later letting the piano trail in behind it.The baritone moan of the vocal heps create an almost Swans like mood. As the song goes into a more doomy place ,the vocals soar over it with a surprising amount of power.

"Rise" gets even darker with tribal pulse to the drums. The song kicks in and feels like a death rock version of Tool for some reason to me. The album close with the 11 minute "Loss of Feeling Loss" . It doesn't begin to bubble to life from it's dark depths until a minute and a half into the song. The song mainly drone on one pounding throb. Overall the band seems to be more focused on droning space rock, than the line the teetered towards darkness, but they continue to be great in the face of these changes, I would have preferred more dynamics from a few of the more droning moments so I will round this up to a 9, as this keeps the album being perfect, but it is still an inspiring listen.