Catching Up With 2013: True Widow: Circumambulation 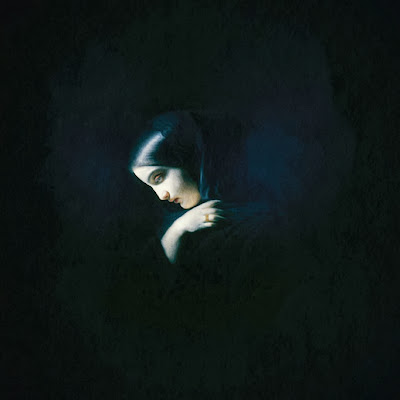 This album came out back in July, but I just found it. This  Texas band calls themselves stonegaze, and it's a fitting label as any, as the guitar playing is too clean to be sludge and the doom is more in the feeling, but I suppose calling them doomgaze would be like calling Chelsea Wolfe doom folk.

After seeing this band live, I was pretty hopeful about this album. The day dreaming drone it carries causes you to wake up in the middle of it and realize you are half  way done. The singer guitarist, seems like a clean cut well adjusted guy, to the drug addle shoe gaze that glazes this album is odd indeed. The songs all carry similar pacing, the dreary nature of the desert coldness that radiates from them , creates the most infectious atmosphere .

The opener "Creeper" no doubt references the type of weed, at least the druimmer was partaking of when these songs were conceived.The vocals often border on croons and whispers , when the two singers harmonize. Their is a David Lynch quality to their songs, that reminds me of the long drives on dark roads his films seem to take.The drums do have less pound to them on this album than they held live. This takes away some of the metal under currents.

The second song sees a little more distortion added, but this is a casual fuzz, nothing I would deem metal as far as the tone goes. The males singer's voice often reminds me of Sonic Youth in it's lazy approach. While no strangers to their re-verb pedals , this album is not soaked in the same amount of effect like say Slowdive, their is still a doomy rock element. The songs are very simplistic in composition, though not minimal, the over all sound is pretty full figured. Their bassist contributes the most to this quality.

" Four Teeth" has the catchiest melody on the album, it almost has a sweet after taste to it. It feels like 60's girl group pop, but with a stoned fuzz to it. The vocal blend on the chorus is really smooth. The fuzz reaches a another level of fullness on the more robust " Numb Hand" . The song meanders around the same lagging mid tempo. The bass has most of the beef leaving the vocals between the buns .

The album's lengthiest venture is the often noise ridden " Trollstigen". It also might be the the heaviest song on the album. Bassist Nicole Estill allows her voice to haunt the top soil of this one. The guitar finds some extra creepy chords to ring out some where post-chorus , though this song walks a narrow line and drone in a similar direction the duration.

There is a more delicate sound to their thunder on " IMO" . This shows the more shoe gazing side, but it also reminds me of Sonic Youth, some of the more shimmering moment from Daydream Nation perhaps. Slim Stacks takes on a more conventional melody when he picks up lead vocals, the bassist balances him out with yes still a very Sonic Youth feel but there a western feel to it.

Their is less dynamic in terms of fast to slow or the often over done clean to heavy. They stay on the same despairing waters they sail on for the course of the album, though at times the guitar sounds more western, think almost old Chris Isaak meets surf rock.  By " Lungr" the album begins at the same dynamic it began with. Their is a sluggish drug shuffle to this one, and a dark cloud hanging over the song, like the one that keeps me in the bed when I am depressed.

I really like this album, it fit my mood the past couple of days and I can see this earning its keeping the iPod, even though when I break it down song by song it doesn't really sound as impressive as I score, partly because of the lazy drone throughout. So I will round it up to an 8.5.