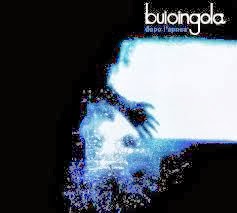 The Bandcamp page of this Italian band assigns themselves labels as reaching as neo-crust, they have craft dense sonic metal that is very shadowy and foreboding.They delve into blast beats on the second song, but as a general rule they feel more sludge driven. The layers of weighty riffs doused in reverb tremolo picking that sits back further in the mix creates an eerie ambiance.

Fans of Tombs will enjoy how the lines are blurred here. Tremolo picking comes back into play to create another sonic layer, but much like when they dip into blast beats, they seem  more like dynamic tools than this band being black metal. Like Tombs there is a very cavernous element to their sound. It sometimes condense it more of a claustrophobic mess, namely "Candida" which is the only song I really here this crust thing and also the most noisy and least musical of the album, but it makes up for this abrasion in the sonics.

"Rigurgito" has a more ambient intro, allowing the song to swell into a more goth like throb. The vocals roar in the distance, before it explodes into their normal bludgeoning. The song does allow for plenty of breathing room in it's ebb and flow, my only real complaint is the vocal stay with the same lower coarse bellow. The guitars sounds are left to compensate for this monochromatic delivery.


The industrial interlude in "Oceano" helps set this band apart from the rest of the roaring sludge out there. The industrial undercoating is hinted at in the metallic clang assigned to various snare hits and fuzzed out distorted beats throughout. The song build after five minutes into a steady beating and jack hammers the point home in it's juggernaut fashion. The fact they are able to keep your attention for fifteen minutes with this ebb and flow, says something about the band. Sometimes the more straight forward assault that comes later in the song seems almost like they are taking the easy way out and feel obligated to get heavy after they have shown you a wider spectrum of sonic. Overall I like this album I'll give it an 8.