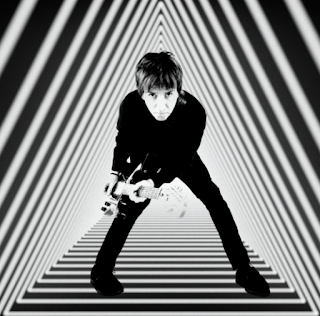 The Smiths influenced goth as much as other artists who pre dated the concept of the genre, like Bowie, Iggy Pop, Kate Bush and the Doors, so this album belongs here for that reason though if set aside to be judged for it's own merits it draws from corners just as moody as other post-punk.  "I Can't Stand Morrissey but Johnny Marr is a great guitarist  "While it is true Marr is great this is a common phrase uttered by many a poseur to afraid of what people think of think them to admit to listening to the Smiths. Funny enough the press release by BMG does not mention the Smiths but calls him a legend, which is funny because The The, Electronic, Modest Mouse and the Cribs did not make him a legend it was well I do not even have to say their name again for you to know.
The song that recalls his legendary days the most might be "All These Days". It is darker , has more dramatic pulse to it. Marr is a decent singer, he does not have the unmistakable croon of his former band mate. Though despite his best efforts to distance himself from that shadow the influence is clearly embedded in his musical DNA and he can not escape it. "Ariel"  brings out his classic guitar tone. Considering who he is , I am surprised the guitar does not get more of the spotlight, as no one came here for this singing which continues to get the job done , but not going to leave you think "I can't wait to put this album on and hear Johnny Marr's voice again"
Lyrically in comparison to Morrissey he seems like he is just peddling boring middle of the road tropes. The dance beat of the opener keeps the song moving in a way that distracts you from this fact. Overall more electronic window dressing adorns this album. His classic jangle returns for ' Receiver"  though the vocals remind me more of Iggy Pop's new wave days or Billy Idol's least rock moments. You can also here some of his roots to a band that even influenced The Smith's  T-Rex.  I will round this down to a 9 because over all this could be a revival of any Brit Pop band you might hear at 80s night, this one just happens to have the most talented guitarist of that era.
Posted by Wilcifer at 6:40 AM