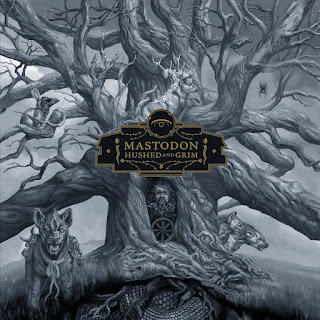 The 8th album by the Atlanta band is a massive undertaking that takes some time to absorb. The opening track, The playing is great and the melody floats, the drumming really goes for the gold. It is not until the last couple of minutes that the song locks into a metal riff. The second song has more attack to it.  Perhaps not as much attack as their first couple albums but puts its foot to the gas more however it is the guitar work of Hinds when it drops into a more, blues-based section that makes the song shine. Often when we think of progressive rock we think of just odd time signature and lots of  dazzling wanking, but how much progress is being made there. On "Sickle and Peace" we here the band pushing forward with their sound. It is almost dancey in how the guitar moves.

I like how they vocals are produced on this album, while Brann has the best voice, things are really smoothed out with the effects on them to make them feel more a part of the musical backdrop. "More Than I Could Chew" touches on some great melodic moments and the guitar solos really are dialed in on this album. It is not surprising that Brent Hinds is moving into a more country direction with his writing input as it feels like he invested himself in the writing of this song. The dreamy 'Skeleton of Splendor" is not as air tight in the writing, as it floats off on it's own atmosphere, but I appreciate the fact they continue to expand the range of sonic colors here.  "Teardrinker" was the first single I caught from this album and it works , perhaps not as impressive as the few songs, or as hooky as they have been in the past but it works. The burlier bluster of "Pushing the Tides" rocks harder but still remains a far cry from the more hard core sludge of yester year.

After the more Megadeth like riff that opens "Peace and Tranquility" I had to listen to the song three times for it kept my attention enough to form an opinion. It works off their signature formula they default to. "The Dagger" and "Had it All" feel as though they run together to finish the thought, the first song being the trip and the second the come down. There is a more Pink Floyd like mellowness to the second half before they roar back harder on "Savage Lands . It is one of the album's most metal moments so far.  "Gobblers of Dregs " finds more Tool influence seeping in after touring with them . They last two songs are very prog indulgent, though "Eyes of Serpents' rings out with a darker storm coming mood I can appreciate. They bleed into one another, it is almost like the last song is a continuation. It builds up into an epic guitar solo, and while melodic feels like the second part of the previous song, so maybe this is how they kept the songs all under nine minutes. Lyrically this feels like their most personal album since 'Crack the Skye" and their best since that one as well. I  will give this one a 9.5.