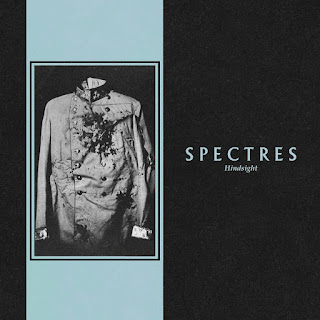 This band from Canada goes  further down the punk side of post-punk. The first song points it's finger in the most snotty brat manner possible despite being grown men. There is a booze ridden swagger than begins to develop that reminds me of Iceage. To their credit the first song is catchy even with it's politically correct confrontation. They just kind of wallow in their hangover on the second song. They might not be as dark as I want them to be in the ways that I want them to, be though the thud of the bass lines is still there. I am open to them just being a downtrodden bitter punk band, but I need good songs in either case. They more fully commit to a Joy Division influenced punk on "Visions of New World', which is ok, but sounds like every other post-punk revival band.
You have to sit through another punk song until they relent and give me what I want which is a more death rock flavored affair. They keep punk sensibilities to the lyrics but bathe them in the flavor of darkness I want. Why they had to wait a few songs in for this , I dunno. They are still plenty pissed. After this they retain a new wave sense of melody to the more nuanced ambiance of the guitar playing. Their singer sings instead of shouts. So much so you can almost here a ghost of a Smiths ' influence on the song "Northern Towns". Then oddly they throw in three songs from the Part Tine Punks live sessions. These are raw and the vocals sit back in the guitar.. I can however hand with the energy they are throwing at me here. The bass line to "Vertigo" gives me that more Halloween flavored postpunk I want. They continue with the great guitar sounds on "Crosses and Wreathes" .
"To the Victor" goes into a more melancholy tone that once again recalls the Smiths .  Why did we need any of the punk stuff they were doing earlier when they could have been doing this sort of thig all along. " Tell Me" is driven by the more disco root of new wave. The sung vocals are heartfelt and well thought out.  The great songs balance out the more punk ones that are not bad just not as great as what they deliver four songs in.
Posted by Wilcifer at 5:38 PM