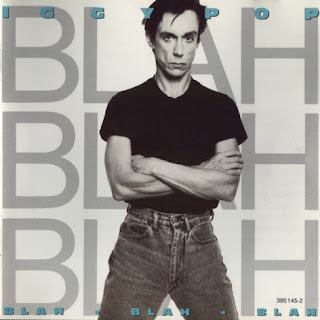 I often credit  the Jesus and Mary Chain's "Darklands' album as being the first "goth" album I bought, but this album I bought before that one. During my intital obsessive interest in David Bowie, I discovered Iggy.  Alongside the Doors and Bowie , Iggy Pop is one of the more influential figures in goth music. I bought this album when it came it out so it proceeded the 87 release of "Darklands" . This was Iggy's stab at making his own version of "Let's Dance". This album was a collaboration with Bowie who co wrote most of the songs, and his backing vocals can be heard through out the album. "Real Wild Child" the lead single is one of Pop's most well known songs so it was a success from that stand point. It is a cover of a Johnny O Keefe song. "It Can't Fall" sounds like it could have been a b-side from "Tonight" or "Never Let Me Down".

It is not until 'Shades' that things get darker and moodier , reflecting the tone of Bowie's 80s period.  The ballad like 'Fire Girl" co written by Steve Jones of the Sex Pistols, keeps a new wave pop slant , but is still darker than even the Cure's radio fare .Much of this is due to the bleak nature of his baritone, that finds Pop in one of his better places vocals as far as the croon here goes. "Isolation" is sung with even more passion. I heard this album before the Stooges, so I can under stand how now 7 albums away from his punk does this could have been divisive , and in some ways it might have been a sell out, but if Bowie was behind it how much of a sell out could it really be?

There is a more rock tone the guitar of "Cry For Love' . I am not sure if the more Billy Idol like sonic quality of the production was intentional or not, but it is a great song. There is a longing in it that falls one the moodier side of post -punk run through a new wave filter. The title track has more of bouncy post-punk quirk to it not unlike Gang of Four if they went in a poppier direction. "Hideaway" is back to being one of those could have been a Bowie b-side that did not make the cut. Even those are better than most people's best work.  With even the nostalgia attached to this album I can still round it up as the 80's production that hampers some of these album when run through Bowie's filter finds this album working perhaps even better than "Never Let Me Down:.