Gothtober- Child of Night - " the Walls at Dawn" 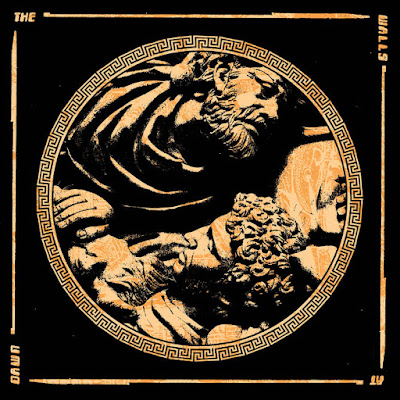 This is an interesting trio slightly dark wave but into analog synths, the vocals have kind of a stark Death in June vibe to them. The production is interesting. While lo-fi , everything feels like it is mixed back in the distance purposefully but in so doing it still retains an organic ambiance. The sound wins me over on the first song so I guess we will see if they songs are capable of keeping me in their spell.  On "Unafraid" they shift over and let the female vocalist step into the fore front and things go in a more retro dark wave direction. Still works for me!  She keeps singing going into "Wounded Child" but by where a chorus would be they trade off vocals . This one is not as focused of a song , kinda gets lost in the smoke machine , though they do hold onto the drone.

Her voice cuts through better on "Disappear",  The production that gave their sound a unique charm begins to play against them when instrumentation shifts. The keyboard riff, keeps the song moving in a right direction. I am going to give this album another listen through head phones and see if that helps . ( Puts ear buds in) Ok well that helped sound wise. So listen to this album with headphones, though truth be told I listen and rate everything normally off my first listen through my computer speakers, so there are albums like the Creeping Death I just reviewed that sounded just fine though them.  "Outbreak" seems like it would be timely subject matter and I am going to be disappointed this month if I do not get more dystopian themed music. I suppose there is a dystopian feel to the music, but this is more of an instrumental interlude working off an ambient wave of synths. I am most impressed by the emotive male vocals on "Son". They are not the most powerful, in other words no Bowie like belting, but it gives me more of an indication that this guy can actually sing. The female vocals also harmonize well. The bass player could commit more to hitting their strings, but everything picks up the slack.

By the time we get to "Indigence" there is a more new wave feel to things. They begin to take on a more uniform feel to the songs , there are some little flourishes of 80s styled synth bits that add flair, but of the two songs "Indigence " has more hook in her melody than his starker exclamations that this place is poison, which might be a lyric I like it just does not stick as well. "True Love Needs Discipline" is a great song title but sadly it is also just an instrumental interlude not a song about BDSM. There is more of a traditional post punk like them to the last song that benefits from a Cure style guitar melody.  Overall I like what they are doing and think they make it work the majority of the time they are writing actual vocal centric songs , so I will give this album a 9 and see how it grows on me.