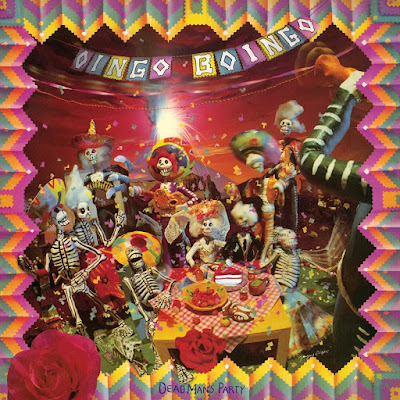 When it comes it to new wave, these guys paint with the broadest brush. If you are goth then you know Danny Elfman already from his work with Tim Burton. This band put him on the map. If you are a pedestrian to all things Halloween then you are going to know the title track from every Halloween mix you have heard at Party City or Spencers . The opening track not as dark as you might have expected. Elfman is a great singer who is also the voice of Jack Skellington so like I tell my daughter while we might never get a Nightmare Before X-mas, if we ever want to hear more Jack this is the place to do it. His upper register is used well on this song, even if it is a little on the happy side.

I do have to take about the title track again, this is more to see if the rest of the album measures up to this and "Weird Science" two 80s defining songs. For 1985 the production on this album is amazing, it holds up against anything out today. Steve Bartek reminds you on "Heard Somebody Cry" that he is a great guitar. Highly under rated and it is a crime his name is not mentioned more in conversations about great rock guitarists. There are some halloween themes in this song as well, so it goes to prove that these guys belong here in October. Those spooky themes are even more present in the lyrics to "No One Lives Forever". I normally do not like ska , but it is certainly something present in that song. This is one of the few bands with a horn section I like.

While they had a video out for "Stay" I do not remember this song out of context of the album. It does follow a more traditional format almost more like Roxy Music, who could be considered an influence on the direction this band took over time. I like hearing the dip into his lower range on "Fools Paradise" which has more of a David Bowie feel. "Help Me" gets almost too happy for me on the chorus though I like the verses. There is also some great guitar work .  On "Same Man I Was Before' they once again get peppy and play it safer in terms of  fitting along the lines of the current trends, but they do return to singing about ghosts, thus adding more spooky cred.He al;ready had his toe in Hollywood as the closer to this album was the theme song to the movie of the same name. I will give this album a 10 and pank it as a classic, because well it is and t he moments with too much pep are balanaced out by his wonderful vocals.